It has been revealed by Sudpresse and Het Nieuwsblad that outgoing Prime Minister Elio Di Rupo’s laptop was stolen on Monday from his car. It contained sensitive information about the royal family, as well as documents on Belgian domestic politics. The theft was committed while Mr. Di Rupo went late in the day to a gym in Brussels, after leaving a meeting the European Commission. His driver had left the car briefly to go to a nearby bookstore.

Contacted by RTBF Thursday morning, a spokesman for the outgoing Prime Minister assured the public that the thieves did not take confidential documents, and the stolen laptop was apparently “secure” .The same source said that the stolen files are “primarily personal notes and some papers, but contain no classified information or state secrets. They are documents that are always carried in accordance with rules and procedures “.

The thieves broke a door and windows to take items from the trunk. Mr. Di Rupo and his driver made a statement to the local Brussels Capital Ixelles police station. The Brussels prosecutor’s office said Thursday it had opened an investigation into the matter.

European Environment: Find out about saving the wetlands 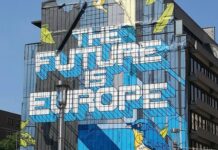