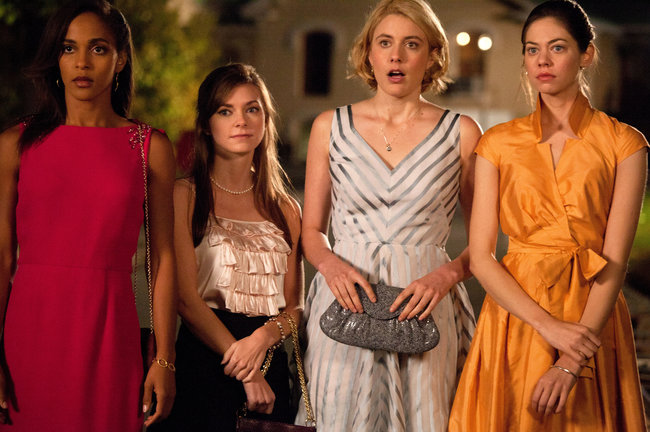 Ever since Frances Ha people have associated you with the way you dance in several of your films. What kind of dance do you like the most?: I love most forms of dance – classical dance, tap, jazz and modern dance especially because it has a whole aesthetic. Modern dance makes you use different muscles than other styles and it also teaches you to fall properly in a way that prevents you from hurting yourself. It’s a beautiful metaphor for life: fall, rise, and you transform into a new person. That kind of free form dance is very liberating and it allows you to express a lot of emotions and thoughts on a different level.

You’ve long been an admirer of Woody Allen and his films. Like Allen, many people identify you with the characters you play. How close to the truth is that?: My characters all contain pieces of myself but they’re reassembled in different ways each time out. I try to create a space inside myself that reflects the identity of each character I play but then I spin off in another direction where there’s still some part of me there but it’s evolved into something else. It’s like I find a way of playing this variation on the truth of who I am.

It must have been a thrill for you to get to work with Allen on To Rome With Love?: It was definitely one of my dreams coming true. It was such an honour to get to be in one of his films. I love his work and he’s been a huge influence on me. I appreciate everything about his style of humour, his neurotic intelligence, and also his love of New York.

What is it about his style of filmmaking that you admire?: It’s his style of humour but also his way of looking at the world. I would like to be able to make films that have that same kind of sensibility and have great dialogue and explore human psychology the way he does.

You and filmmaker Noah Baumbach have been partners both in real life and in your work for several years now. What is your creative process like when you work together on a film?: We work in our own separate rooms and then we spend several hours together where we often read aloud what we’ve just written or simply discuss some ideas about a particular scene or character.

We use that time to exchange criticism and opinions and then we separate again and we continue to write on our own. Slowly the characters begin to take shape and the story begins to emerge. Reading aloud is important to us and it helps us find the right tone and rhythm to the dialogues. Language is very important in the way it influences the way we talk and move.

Apparently you always carry a notebook with you in case you find something inspiring that you can write about immediately?: Yes, I like to write down what I hear on the street or in cafés or restaurants. Most of friends are aware of this and they try to make sure that I don’t have a pad and paper next to me if they’re about to tell me something very personal! [Laughs]