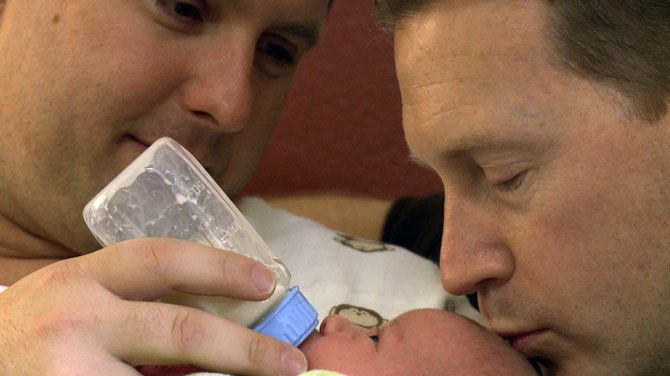 The 2012 figure shows a considerable rise compared to the previous year. In 2011 only a quarter of all adoptions of Belgian children were by lesbian or gay couples.

Figures from the Flemish Adoption Centre show that fourteen of the thirty Belgian children that were adopted were adopted by gays. Two years ago the figure was barely 6 out of 25. Lawmakers legislated in favour of adoptions by gays and lesbians in 2006, but it is only now that gay adoption is starting to become really noticeable in the figures.

Ariane Van den Berghe of the Flemish Adoption Centre: “The trend started really slowly. During the first years the number of gay adoptions was limited. Prospective lesbian and gay couples have to go through the usual procedure and end up on a waiting list. As a result it took some time for the gay adoptions to flow through into the system.

The fall is linked to the disappearance of Kazakhstan as a country of origin for children adopted in Belgium. The Kazakh authorities are reforming their adoption legislation and as a result all foreign adoptions are on hold. Ethiopia that provided the largest number of children for adoption in Belgium is sending fewer children to Belgium nowadays.