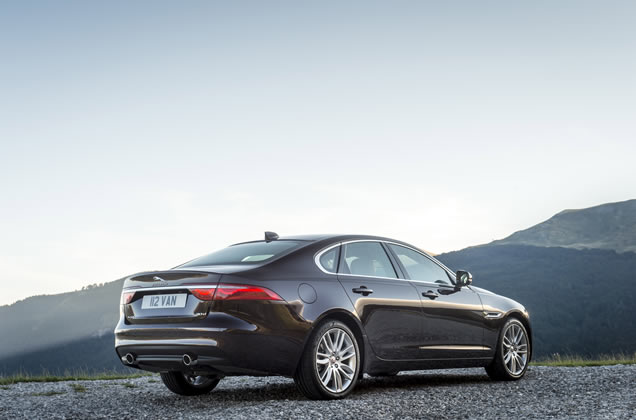 Our motoring correspondent Bob Monard takes a look at the new powerful Jaguar, one of the cars to keep an eye.

A roadmaster, the XF appeared in 2007, with 250,000 now sold up to summer 2015. For a top-to-bottom review, it is now 190 kilogrammes lighter, due to its aluminum base being increased to 75%. This, combined with the reduction in its drag coefficient of 0.29 to 0.26, makes it more efficient, more agile, more spacious, with more technology – and it is all the more beautiful and speedier.

It’s important to differentiate this model from her older sister – while the hood contains the framework of her predecessor; she is at least 15cm longer, with a more flared, curved grille and tapered optics.

There’s a chrome surround on the side windows, while vertical side ventilation is in place between the joint of the front door up to the top line of the beltline and wheel arch. The back is more conservative, with the only innovation being the engine’s displacement to the lower right end of the trunk.

Radial engines are available, with the choice between a two-litre four-cylinder petrol engine (240 hp) and diesel (163 and 180 hp), and between six Eurosuper compressor cylinders (340 and 380 hp) and fuel oil (300 hp) – there is a six-speed manual transmission or automatic at eight levels according to the engine block.

AWD can couple with the most powerful petrol engines – having taken the wheel of the various models, we will risk a general conclusion: the XF has it all. In addition to the refined luxury of its interior in which you feel marvelous, it is the versatility of the XF that seduces. While sitting in an arena of leather, aluminum and ebony-grey ribbed paneling, with very generous headroom and leg space in both the rear as well as the front, you can enjoy the real discretion of the upper-class saloon.

Everything is wonderfully quiet – nothing is allowed to taint your serenity. With a look that’s poised with pace and support, comfort is in no way lessened. Dr Jekyll and Mr Hyde – sometimes polished, sometimes wild, the split personality is all the richer. A ride in a beautiful Pamplona environment as much as on the Navarra circuit, the XF has not departed from its DNA: it’s a Jaguar, in the noblest sense of the term.

Created in 1922, the Jaguar brand was bought in 1990 by Ford, then resold to India’s Tata Motors 18 years later. Representing very much the British style of yesteryear, Jaguar are nonetheless authentically modern vehicles: everything is as smooth as silk, with classy splendour reigning without ostentation.

We have a few regrets, however which, while not tarnishing our very flattering picture of the XF, need to be highlighted – why is there a promontory which is reflected in the windshield, and why, in the deep 540-litre boot, is there an awful aluminum bar? It would have benefited from a few centimetres of carpet as well, no? After the XE, with sibling class C A4 and 3 Series XE comes the German Class E, Series A6 and 5. For each sector, Jaguar scores very highly, because of their differences which go to make up their charm. Plush, poised and very sporty – with many good years ahead, who could complain? In terms of price, the choice is between Luxury, Portfolio and R Sport. Diesel is negotiable between €40,350 and €63,650, while gasoline ranges between €47,860 and €76,860.

More luxury cars coming soon in our preview of the European Motor Show.