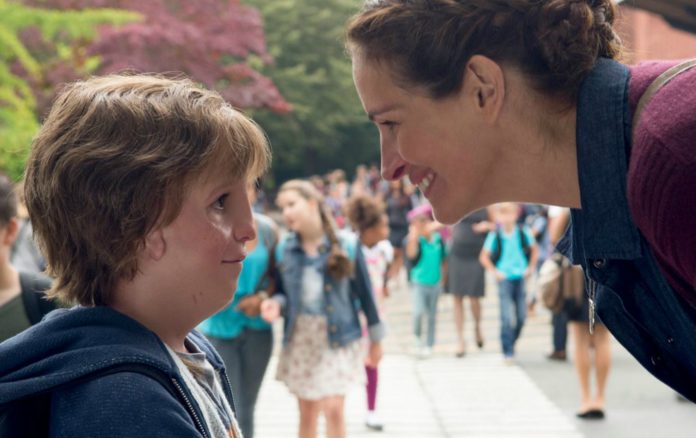 This month Together chatted to Julia Roberts about her latest movie Wonder.

Sitting in an airy hotel suite, with a breeze tickling her godlike blonde mane, her smile as bright and dazzling as the sun, Julia Roberts emanates movie star. It’s coming from her perfect miniscule pores. She takes a sip from a glass with those perfectly plump lips while her chocolate oval eyes glance to her left side, taking in a whispered conversation between clipboard-wielding publicists.

Every mundane action is transformed by Robert’s visceral star power presence. She is a true movie icon in the flesh. Which makes it hard to imagine the Oscar-winning star of Pretty Woman, Erin Brockovich and My Best Friend’s Wedding could or would ever feel apprehensive around her devoted fans and well-wishers on the street. But it’s true.

“I don’t hate it but I try to avoid it,” she tells me. “It makes me feel nervous, maybe I’m shier than I realized, I don’t think I’m very good in that interaction. I get nervous. It’s always been that way. I’m not sure what to say.”

Problem is, Roberts is so appealing and irresistible. Even the most hardened Hollywood hater would melt in her presence. Even a relatively low-key outfit of a black blazer and speckled black and white lightly see-through shirt would on most, appear rather ordinary. But on the recently turned 50-year-old, it’s a vision in glamour.

Perky and fun, though terrifically seasoned and equipped with what she wants to answer and more important, what she won’t, Roberts is in sunny humour as we discuss her latest performance in Wonder.

She plays the mother of a young boy (Jacob Tremblay) who lives with acute facial disfigurement. After being home-schooled for all his life, she decides it’s time to let him experience life in the outside and take his first steps into middle school.

And while bullying and harassment become part of his daily routine, she has to allow her son to grow strong and learn to stand up for himself. And ultimately love his imperfections. It’s a very personal project for the star who fell in love with the book while reading to her three children, twins Hazel and Finn, 13 and 10-year-old Henry.

Roberts talks bullying and social media and being open about having favourites out of her brood. She also talks turning about 50, why George Clooney gets different treatment and her idea of happiness.

The star lives with husband Danny Moder and their kids on a ranch in New Mexico.

Next page: The Interview