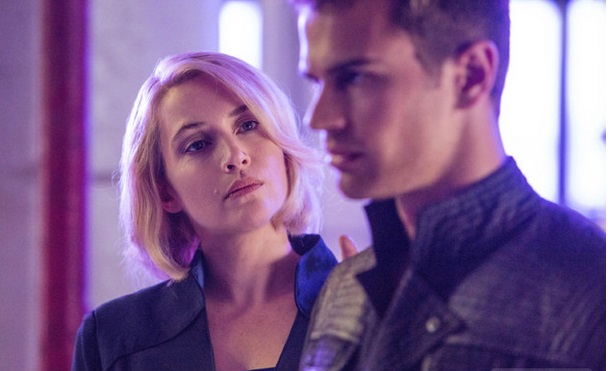 And what I saw there was John’s very unique style where he throws in all the blood, all the violence, all the unsettling elements, and then he takes out all the music and the sound effects and the noises and there is an honesty in that which I was fascinated by.

Were you hesitant initially?
I read the script and it said, ‘Irina, a Russian Israeli mafia boss’ and there were alarm bells straight away. It seemed so far away from anything I’d done before.

But I read the script and got to the end and thought, ‘Right, I’m going to have to do this. It’s an amazing part, very well-rounded and complex and fun. And it terrifies me and that ultimately was what I was after at the time. I wanted to be shocked, I wanted to be pulled out of my comfort zone. I don’t ever want to be in my comfort zone.

You had only just had your son Bear at that stage too, right?
Yes, can you believe it, we filmed it back in June 2014 and Bear was only six months and he’s now two years and two months. And at the time, this role was perfect for me because I had just had a baby and I wanted a short, sharp jolt back into reality and to feel the most challenged I could be, really feel terrified and out of my depth. Because that’s how I like to operate.

Why did the film take so long to come out?
I’ve been asked why it’s been in the can for so long, but it hasn’t, it’s just the way John works – he just fiddles and tweaks and fiddles and tweaks until he gets there, and it took an immensely long time. It’s nothing more complicated than that.

You look so different to how we’ve seen you before. The hair for starters. Amazing.
The hair was a key part of the character. I remember John saying to me, “Her hair is going to be key.” And I thought that was so strange because I’ve never heard a director say that. They don’t normally care about that, but he was extremely clear that he wanted it to be very 80s, with a 90s Versace backcomb. Lots of teasing and hair extensions. Pure fabulous.

You’re once again doing an amazing accent, a very unique Armenian, an American drawl and then a perfect Aussie brogue. But was Irina’s a bigger challenge?
With Eastern European, there can be a slight caricature there, which can descend into parody, slightly comedic, and I didn’t want that to happen. I wanted it to disappear and not be heavy-handed.

I love doing accents, but I often find them deeply frustrating. Playing Joanna (Steve Jobs, 2015), who was born in Poland but raised in Armenia, and then went back to Poland briefly as a teenager and a lot of her family members  were largely speaking Russian, and she would say to me, “What do you mean, my accent is straightforward.” And I’d think, ‘Really Joanna, not it’s not.’ She was definitely one of the more difficult ones.