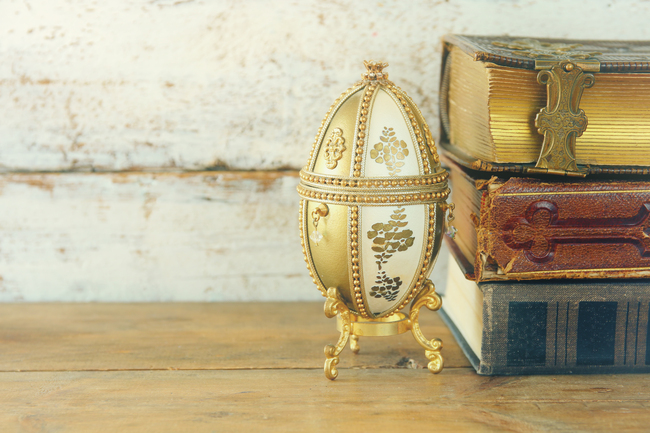 For most people, the first thought that occurs when the name House of Fabergé is mentioned is that of the jewellery house’s immortal Fabergé Eggs. It is believed that around 69 eggs were created, in St. Petersburg, Imperial Russia, of which 57 still survive today. Peter Carl Fabergé supervised the manufacture of virtually all of the eggs, using jewels and precious metals to create Easter eggs for eternity, for the Russian Tsars.

The actual firm, House of Fabergé, was created in 1842, then, in 1924, Fabergé Paris was opened by Peter Carl’s sons Alexander and Eugène. In 1937, the rights to the Fabergé brand name were sold to Samuel Rubin for the marketing of perfume, and the brand name was then resold in 1964 to cosmetics company Rayette Inc., which changed its name to Rayette-Fabergé Inc. Today, the brand is solely used for jewellery items and gem stones.

The very first egg was crafted for Tsar Alexander III, who had decided to give his wife, the Empress Maria Feodorovna, an Easter egg in 1885, possibly to celebrate the 20th anniversary of their betrothal. Many believe that the Tsar was inspired by an egg owned by the Empress’s aunt, Princess Vilhelmine Marie of Denmark, which had captivated Maria’s imagination in her childhood and of which the Tsar was well aware. Known as the Hen Egg, the very first Fabergé egg is crafted from a foundation of gold. Its opaque white enamelled ‘shell’ opens to reveal a matte yellow-gold yolk. This, in turn, opens to reveal a multicoloured gold hen that also opens.

In the 1983 James Bond movie Octopussy a Fabergé Egg is the central MacGuffin (a red herring) – Bond (Roger Moore) swaps a genuine egg for a fake, then tempts the film’s villain, who is cheating at backgammon, with the bona fide egg, before
turning the tables and winning 300,000 rupees from him. Raised eyebrows all round.

And as far as international espionage is concerned, kind of, in a bid to acquire more foreign currency, Joseph Stalin had many of the Fabergé Eggs sold in 1927, after their value was appraised by Agathon Fabergé. Between 1930 and 1933, 14 imperial eggs left Russia. Many of the eggs were sold to Armand Hammer (president of Occidental Petroleum and a personal friend of Lenin, whose father was founder of the United States Communist Party) and to Emanuel Snowman of the London antique dealers Wartski.

And, a recently discovered Fabergé Egg found in a flea market with a $14,000 price tag was later valued for around $33 million. British King George V and Queen Mary were huge fans of Fabergé objects and so in 1933, they purchased three exquisite imperial eggs – the Colonnade Egg Clock, the Basket of Flowers Egg and the Mosaic Egg. The eggs now belong to Queen Elizabeth II, who also owns multiple other Fabergé collectibles including ornaments, boxes and photo frames.

However, some of the eggs are still missing – after the fall of the Romanov family during the Russian Revolution, the Imperial eggs were looted and scattered throughout the world, creating one of the most intriguing Easter egg hunts ever. Some are in private collections, some are in museums and some have vanished without a trace.