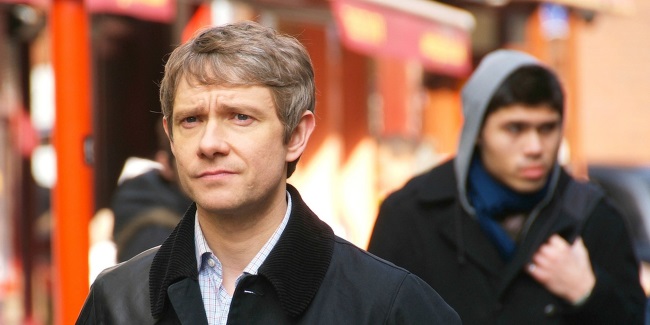 It will have broken boundaries though.
If it’s broken boundaries, great. And maybe for younger audiences in particular, they can say in the future, ‘this is how it always was, at least to my knowledge and memory.’ We all want to get to stage where it’s just a film and it’s normal.

But we’re not there yet.
It will take a couple more [movies], you’re right yes. And I hope once that happens, people will simply say, ‘oh, it’s a film,’ and nothing more.

From working on something like Sherlock or The Office to a mega blockbuster like this, must be so disorientating? Is there a huge chasm between the two with just being on set?
It’s really similar to me [laughs]. The camera is the same and whether it’s something smaller or something huge like this, the job is always the same for me. Filmmaking is a group of people coming together and trying to tell a story in the best way.

Yes, sure, on these movies with huge budgets, you’re looked after very well, between accommodation, and travel, food, they want to make your environment as comfortable for you as possible so you can do your job to the best of your ability.  So, there’s the difference there.

So whether it’s a small indie, or a giant Hollywood picture, it’s just work to you? You don’t feel like, ‘Now, I’ve made it.’
I’m pretty proud of everything I’ve done. There’s stuff I’ve done, and 20 people if I’m lucky have seen it, perhaps fewer and I’m so proud of those, as much as I am about the super popular projects I’ve worked on. I don’t discriminate.

Of all your bigger projects, the ones with the huge following, do you feel like you have a slight favourite over the other?
No, not at all. They’re all special to me for similar and separate reasons.

But if you had to pick.
I think I’m particularly fond of The Office, if I had to pick one and because you’re asking because that’s where it all took off for me. I wouldn’t be here talking to you without it. At the time, it was the biggest thing I’d ever done and the first time I’d had that giddy excitement. It changed my life, it was when I started getting stopped on the tube. I love it. If I catch it by chance, I’ll always sit down to watch. Because it’s my kind of show, it’s everything I like.

Is that what you normally get stopped for even today?
For a certain age. People over 30, that’s often what they want to talk about but people under, they don’t really know about The Office – they either haven’t seen it or it hasn’t had the same pop culture impact on them now, as it did 16, 17 years ago. They want to talk about what I’ve done since.