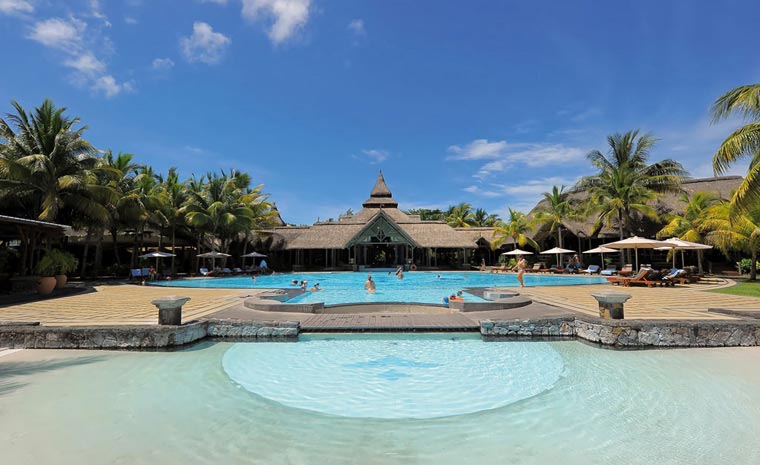 Mauritius, part of the Mascarene Islands, lies in the Indian Ocean about 2,000 kilometres off the southeast coast of the Africa. The island was the only home of the Dodo bird, which became extinct fewer than eighty years after its discovery. But Mauritius has not gone the way of the poor Dodo – it has developed into one of the world’s top luxury tourism destinations. With good reason. Blessed with a tropical climate and clear, warm water, stunning beaches and tropical fauna and flora, it is no surprise that it received the World Leading Island Destination award for the third time and World’s Best Beach at the World Travel Awards in January 2012. The good news is that it’s only three hours ahead of us, and a 10-hour flight from Paris or London. We flew Air Mauritius to get an early taste of the island.

We headed for the south of the island, which is impressively well-preserved – more specifically to the serene welcome awaiting us at the Shandrani Resort and Spa. That word ‘welcome’ sums up the entire island – the locals (descended from a mix of nationalities and expressing themselves in English, French, Creole and Asian languages) open their arms wide to ensure you enjoy yourself: sometimes luxury can be that simple, especially when there are five stars attached.

The resort is part of the aptly-titled Beachcomber Hotels group, which also has places in the Seychelles and Marrakech. Set on a private peninsula lapped by the Blue Bay Marine Park that’s rich in sea life, Shandrani has three different beaches to discover. A short boat ride inshore takes you to the famous Iles aux Aigrettes nature reserve.

Whether it’s peace and quiet or an activity holiday you’re after (or a combination of both) it’s all here in one place, surrounded by the bluest waters and a perfect sky. Outdoors, take your pick from nature beachcomber eco-tourism walks, to sailing with the resort’s certified sailing club, diving with members from a PADI-affiliated centre and, of course, what comes naturally in the ocean, water skiing, windsurfing, sailing, kayaking and, on dry land, golf and tennis – or head indoors to the Source Spa which features 11 treatments rooms or the Source Wellness with 20 tropical cabins. You are in the hands of therapists who have all been trained by Clarins to deliver a very high quality of service.

As you rub shoulders with people drawn from the four corners of the earth – from Australia to South Africa to Brazil – there is one thing that will not be on your mind: the bill. The offer is all-inclusive so you can kick back, safe in the knowledge that no nasty surprises await around the corner. So leave your wallet safely tucked away in your room.

Any notion of working off those extra pounds should be left behind on the plane – gastronomically, you will be assailed by Executive Chef, Italian-born Fabio Zanforlini’s food and wine. With five restaurants and two bars, you won’t lack variety.

There is a wide range of accommodation available, including family apartments with two bedrooms and two bathrooms, but it has to be said that this particular resort is a popular destination for honeymooners or couples celebrating that very special anniversary together.

In the late 1800s, Mark Twain travelled to the island. A Mauritian local said to him: “Mauritius was created first, and then heaven; and heaven was copied after Mauritius.”