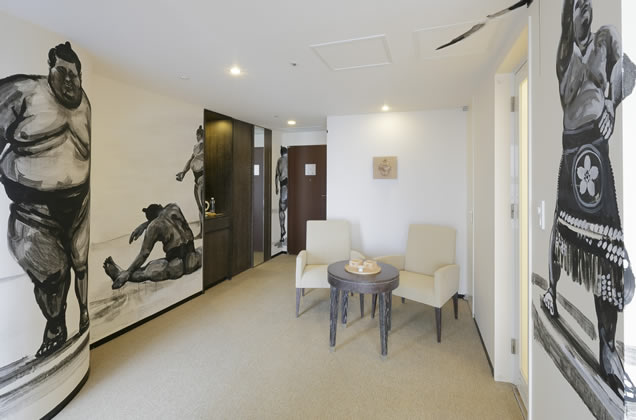 Tatiana Praxis headed to the Metropolis for the first time for a spot of fashion and art.

It’s hard not to have high expectations of your first trip to Japan. Almost everyone is already accustomed to its exquisite food, minimalist décor and near-mythical history. As an avid traveler and lover of new experiences, I was anticipating a sensational cultural immersion while at the same time, preparing to be disappointed by reality.

I arrived in Tokyo by Shinkansen, the rapid bullet train that takes around three hours to complete a 513 km journey. I was immediately immersed in the high-tech context that Japan is world famous for. Not only is it the fastest train in the world, it departs every 15 minutes; if you miss one, you’re only a coffee away from the next one. Despite my utter lack of Japanese, I was also able to navigate the Tokyo subway network without stopping to ask for directions, though when the locals caught me staring at the subway map a little too long, they would offer to help anyway.

The first thing I did was jet off to explore the iconic Shibuya district. There, hundreds of multi-colored neon and LED signs cover the high rises’ surfaces, bearing a resemblance to New York City’s time square. I wandered in some backstreets looking for food, stumbling upon gadget shops, unique fashion stores and futuristic restaurants. It looked like everything from your meal to shoes could be ordered or searched on a big screen and delivered to you with barely any human interaction.

Asia has always felt like the future for me, being seemingly decades ahead of us in technology, but Tokyo is arguably ahead of the pack. Any device or electronic gadget you can think of – apart from Back To The Future’s hover board – can probably be found in Tokyo. I found things I never knew I needed but now can’t imagine myself without, such as a tiny drone that fits in the palm of your hand, food shapers to make hello kitty or panda bear shaped rice and a 3D milk foamer that can make shapes come out of your latte.

Tokyo is perhaps best known for its shopping. The Japanese have a very unique style; from the garish layers of Harajuku to the fabulous designs that can best be described as wearable artwork in Ginza. I had to pay a visit to Dover Street Market, the designer clothing empire that spans over 12 floors. Though I could never wear any of the pieces personally, never mind afford them, I was happy to browse through the building seeing how Japanese fashion designers pushed ready-to-wear beyond the norms. The building is connected to Uniqlo’s equally big, flagship behemoth. The Japanese brand currently taking the basic fashion world by storm was much more my speed.

When the rain took on biblical proportions, I headed over to the Yukari Jindaiji Onsen. The thermal waters with healing and relaxing powers are Japan’s pride and favorite attraction and a delight for travelers as well. It was quite a ride all the way to the Chofu station, followed by a short cab ride to the Onsen, but one well worth the trip, since this onsen was designed respecting Feng Shui principles. Side note for the tattooed travelers: be prepared to either cover up or bandage your tattoos as this particular onsen, and the large majority of them, don’t allow inked patrons.

Probably the most thrilling part of my trip was my stay at the Park Hotel Tokyo, a true art hotel. In 2012, the decision to have Japanese artists use guest rooms like canvases gave birth to their first artist room: the Sumo room by artist Hiroyuki Kimura

To date, they have 13 completed artist rooms. The central theme for the rooms is ‘Japanese beauty’. The abstract guidelines have allowed some artist to focus on nature, architecture, national treasures and traditions. My favorite was the ‘Otafuku Face’ by Aki Kondo. “I felt that the whole beauty of Japan was within the ‘Otakufu Face’,” said the artist. The artists stay at the hotel during the project, use the facilities, have breakfast and interact with the guests. During my stay, I got to meet Kazuki Mizuguchi, who’s currently working on the 14th artist guestroom. The hotel hopes to have the entire 31st floor completed by 2016.

In the morning, I felt like I was rising from a piece of art. The smell of paint was ever so slightly lingering in the room and the brush strokes were palpable. On the way to breakfast, I noticed a small exhibition of traditional Japanese artifacts. These were indeed a loan from the Masaki Art Museum in Osaka. Further even, on the walls of the atrium were more paintings from Japanese artists. The Park Hotel Tokyo dedicates itself to Japanese art so much it has become a live-in museum.

No matter how much you’ve heard and seen of Japan before your first trip, it is no real match for the actual experience. Very few countries still give me the satisfaction of being in a truly different world, and the fact that I dream of returning is the ultimate proof that it has by far exceeded my expectations.