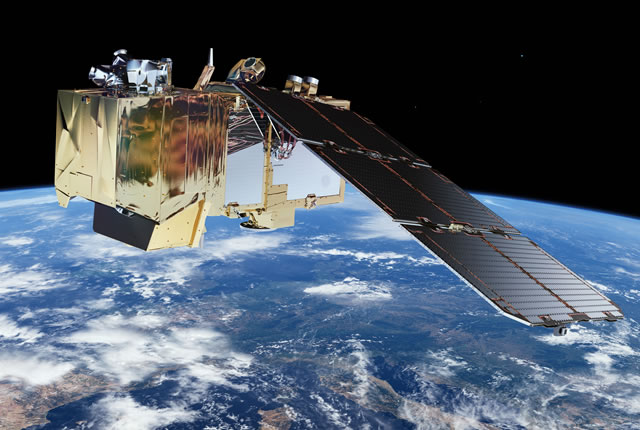 On June 22 of this year, a rocket took off from French Guyana carrying what was possibly one of the most important payloads ever shot into the void by the European Union. In a joint effort by the EU and the European Space Agency (ESA) the rather boringly named Sentinel-2A satellite was sent to join its twin, Sentinel-1A, which was launched in April of last year.

Boring names perhaps but the function of these stellar twins is anything but. They are the first steps in an extremely ambitious trans-European effort, the Copernicus programme. As you are no doubt aware, Nicolaus Copernicus was a Polish scholar who wore many different hats. He is most famous for his model of the universe that placed the sun at the centre and revolutionized the way scientists thought about how the universe functioned. A fitting name for a project that promises to be one of the most ambitious ever seen in Europe or indeed the world.

From a basic viewpoint these satellites, along with Sentinel-2B, scheduled for this time next year, will provide high resolution shots of the entire world’s surface, including coastal waters. From a slightly more technical viewpoint, both satellites will cover the Earth every five days, with a field of vision of some 290km. At a height of 786 km and offering a graphical resolution down to as close as 10m, the satellites represent some of the best hardware available outside the military. Because the turnover of data is so rapid (14.3 revolutions per day and a five-day ‘revisit’ lapse), it will be easier to monitor changes and follow trends.

Sentinel-2A provides a ‘colour layer’, complementing the existing photographic all-weather data already provided by Sentinel-1A. Using a high resolution colour camera with 13 spectral bands, it can provided simulated colour overlays describing temperature, the status of crops and glacier monitoring, alongside a host of other practical applications.

All this is very well but why should we be getting so excited about yet another piece of hardware whizzing around above us? Well, if you are a hardcore European, you could take pleasure in knowing it is an all-European project involving 42 separate companies with input from service providers and data users. If you aren’t, that doesn’t matter. The system has many features designed to not only improve the lot of Europeans but the world as a whole.

– A Danish company that takes the data in order to predict the spawning of algae blooms that plague the country’s coastline from time to time. Using data models based on Copernicus output, they can successfully monitor and predict the appearance of this threat to the flora and fauna of their shoreline.

– The so-called Coral Triangle around Papua New Guinea, The Philippines and Malaysia is home to 30% of the world’s coral and the largest known concentration of tuna. Due to global warming and illegal fishing respectively, these resources are under threat – a threat that has the potential to affect some 50 million Indonesians whose livelihoods depend on the tourism and fishing of these waters. Using Copernicus data, ocean temperatures, pollution levels and even illegal fishing attempts can be recorded and plans made to avert potential disasters.

While the arguments over borders, fishing rights and global warming rage on, there is one practical application of Sentinel/Copernicus data that should be widely accepted as a good thing – emergency monitoring. Using satellite data and in situ data supplied via agencies or crowdsourced applications such as OpenStreetMap, Copernicus data has been used in situations as diverse as the Ebola outbreak in Guinea, the grounding of the cruise liner Costa Concordia, the ongoing relief efforts in Haiti and the recent flooding in Bosnia-Herzegovina and Serbia. In this last case, the two countries asked the international community for aid and the EMS (Copernicus Emergency Management Service) provided flood mapping data to the hydrological services in the Balkan region and the lower Danube river basin to assist in decision-making and early warning.

Is there a ‘bottom line’ to all this? No. The satellites are funded by the European taxpayer but the data are, in principle, available to anyone who asks, free of charge. Obviously, there will be some restrictions where national or international security may be at risk but aside from this consideration, it’s described by the project as “public goods”. This said, it’s unlikely that you, the reader and would-be casual user of satellite data will be getting your hands on it very soon, as a subscription is required. Still, there’s always Google Earth to play with.