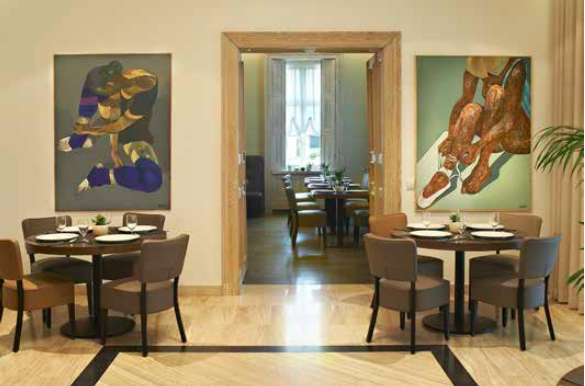 1. A chance to travel back in time, (while living in the lap of affordable luxury)
The Opole Silesia region was once the place where the Polish royalty and aristocracy built
their mansions and palaces, hence the 200 spectacular castles that can be found there. The
good news is that because the area belonged to the German occupation during WWII, the exteriors of the castles were protected and therefore well-preserved. The bad news is that the castles’ interiors were largely gutted and destroyed during the post-war Soviet invasion (the soldiers pulled the wainscoting from the walls to use it as firewood after having burnt or wrecked everything else).

When the castles fell to ruin, many of the locals salvaged relics, which still sit in their living rooms and backyards. Since then, the castles have had storied histories as Soviet administration offices, farms, residential flats and even sanitoriums. Over the past 10 to 15 years, however, there has been an attempt to restore them to their former glory. (There is even a Polish reality tv show called Let’s buy a castle about what private buyers have done with them). Many have been turned into hotels and wellness centres. With their excellent restaurants and picturesque grounds, it is easy to understand why they make for great wedding venues and quiet family getaways.

We stayed in Moszna castle in the Opoloski Region, which has 365 rooms, 99 towers, as well as a concert hall decorated in the neoclassical and gothic styles of its original splendour. Visitors to the castle can walk the stunning grounds, take an historical tour of the owner’s elaborate private quarters, and sit in the large basement chapel, which the Soviets used as a horse stable, the evidence of which can be seen in the marble stairs, chipped by hooves. School groups regularly come through on Harry Potter Tours, and indeed it is easy to imagine JK Rowling staying in one of the standard rooms while penning The Philosopher’s Stone. The concert hall functions as a cultural centre where locals can attend performances. We were lucky enough to see the most incredible (and totally unexpected) accordion performance by two young virtuosos whose names bear mentioning – Lukasz Gogol and Grzegorz Kuryla. Together, they made the Amelie Poulin soundtrack sound like Twinkle Twinkle Little Star.

2. Nature With three large lakes in the Opoloski region, the Odra and Nysa rivers snaking through national parks and quaint villages, old train routes that have been converted into bike paths, a more rustic way to travel through the area could be to stay at the various lake campgrounds or rent a lakeside cottage. The area is great for summer activities and cycling or hiking trips through the fields of colza and lush forests or alongside the river. It would be fun to create your own castle tour by bicycle and treat yourself to a well- deserved lunch or dinner at either the Sulislaw palace in Grodkow, or the Hotel Bajka in Grodziec.

For water sport enthusiasts, Opoloski Nysa Lake and Otmuchowski Lakes have great beaches and are perfect spots for windsurfing, sailing, water skiing and the like. The Turawskie Lakes are closer to Opole city (about 15-20 km from the centre) and accessible via a bike path through a pine forest that goes directly there. Kayaking jaunts are possible with local river guides who will take you down the Mala Panew river. Equestrian events are big at the Jakubus Palace (also a 4-star hotel) in Jakubowice where 800 horses and 1,100 riders gather in July for a horseback riding event that brings people from all over Eastern Europe. There are 47 sport horses on the palace grounds, and they have even built stables underneath luxury suites in a modern spin on the way house barns (or einhaus in German) used to house livestock and people under one roof.

3. Food Fans of pierogi, sauerkraut, and/or pickles might be interested in further developing their palate by trying traditional Silesian fare. Karp po Niemodlinsku is a carp dish that the region is known for as it is fished locally. There is a delicious sour buttermilk soup served with rye bread and seasoned with marjoram. Panczkraut is well worth a try
– pork chops served with fried sauerkraut mixed with potatoes, fried onion, and bacon; and the traditional Sunday dinner beef roulade with red cabbage and potato dumplings known as kluski slaskie, the Polish version of gnocci. All must-eats. While many restaurants are beginning to serve international cuisine in an effort to be cosmopolitan, several chefs are serving up new takes on classic dishes to preserve Polish culinary heritage. Hotel breakfast buffets are an exotic mix of patés and cold deli meats, unusual cheeses and Polish crèpes (Nalesniki), and to-die-for bread – naturally, an early morning feast fit for a king (or queen).

The Polish are also crazy about coffee – an innovative Polish specialty coffee roaster known as Hard Beans is creating a buzz (literally and figuratively) in the coffee world and
taking roasting to the next level. They are the first coffee roaster in the world to test the ideal conditions in which to store beans by storing it in different fridges with regulated temperatures. They’re also in the process of patenting a first-of-its-kind industrial cold- brew press they’ve designed.

4. History WWII and its aftermath decimated Poland. As such, you’d expect there not to be much evidence of history that survived. However, the Silesian region is steeped in it – from museum collections at the Museum of Opole Silesia (aka Opole Regional Museum) that display fossils from the Early Bronze Age, as well as the traditional costumes, rituals, and pastimes of the region’s peoples. There is a section devoted to 18th and 19th century art collections as well. About 6km outside of Opole proper is a reconstructed open-air village built in the rural architectural style. Visitors can see typical Polish wooden houses of yore and learn about how the people lived and worked. Travel northeast of the city toward Kluczbork and Olesno and you’ll find several intact wooden churches along the way. Also, in Opole city, you can visit a factory where they make hand-painted egg and porcelain – a long-standing cultural tradition in the region. And of course, there is the Polish song museum, which the region is famous for.

About the Opole Silesia region – The Opoloski Voivodeship borders eastern Czech Republic. German is officially recognized as a second language in the region.

Opole was voted by Poles in September 2018 as the 8th most liveable city in the country, scoring high points for being clean and green. www.visitopolskie.pl