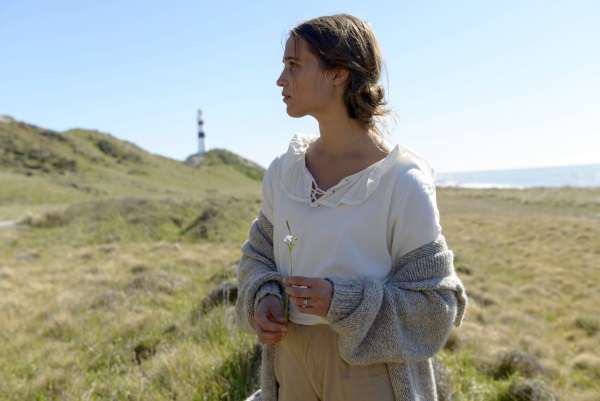 You’ve also formed your own production company, Vikarious Productions, which sees you playing opposite Eva Green?
We shot the film in Bavaria, Germany and it’s called Euphoria.

It’s great to work with Eva Green who I admire so much. We play two sisters. And Charlotte Rampling is also on board in the role of our mother.

Did you want this film to be centered around women?
We need more women’s stories and for women to occupy a more important place in our industry. Lisa Langseth, who directed Pure, a film I did many years ago with her in Sweden, is also directing this film.

It’s sad, though, that women still need to fight so hard in this day and age to have more opportunities. It’s very frustrating to be asked how it feels to play a strong female part because it shouldn’t even be a question anymore. There should be strong female characters just like there are always strong male characters.

Also, there needs to be more roles for women and not just one or two good parts in films. When I look back at the 16 or 17 feature films I’ve done, there are only a few where I had great scenes with other women. That needs to change.

You’ve said in the past how you were looking to take some time off but it doesn’t seem like you’re going to be able to do that?
I don’t think so. Even after the Oscars (where she won for best supporting actress for The Danish Girl) I had to rush back and go back to work on the Bourne film. But I still find time here and there where I can turn off my phone and disappear for a while and do yoga and enjoy my time away from the movies.

And when I wanted to take several months off I got a call from Wim Wenders (for his new film, Submergence, with James McAvoy) and how was I going to say no to a legendary director like that?

You career keeps gathering momentum with the Oscar for The Danish Girl, your Bourne film, and Light Between the Oceans. Soon you’re going to begin work on the new Lara Croft film.  What is your perspective on taking over that role?
When I heard they were going to make a new Tomb Raider, I thought Angelina was the one and only Lara Croft, and she would be difficult to replace. But a new version of the video game came out in 2013, and our film will give a different vision of the character and we want to be able to put our own stamp on it.

It’s always going to be a challenge to take on a character like this, especially one that Angelina Jolie turned into an icon. It’s very exciting to have the chance to play Lara Croft.  It’s obviously going to be much more physically demanding than anything I’ve done before and I hope I’ll be up to the challenge!

Do you think it will be difficult to keep your private life with Michael Fassbender from receiving too much attention?
It’s something that I’ve chosen not to speak about and I think that is the best way to deal with it. He’s an amazing actor and the rest I want to keep private.

Do you fear the added pressure of becoming a major star?
When you’re working, you never think about any of that. And when I have some free time, I spend it with friends and family I’ve known for many years and I never feel strange or as if people are treating me differently.

What’s the oddest thing about traveling so much?
Once I had a Skype dinner with my friends. We each decided to buy a bottle of wine and cook something for ourselves and then sit at a table and Skype each other. The whole thing started as a joke but it actually worked. We had such a good time that when it was over we thought we would all go out for a drink together until of course we quickly realized that we were in different parts of the world. But it was a great night anyway!