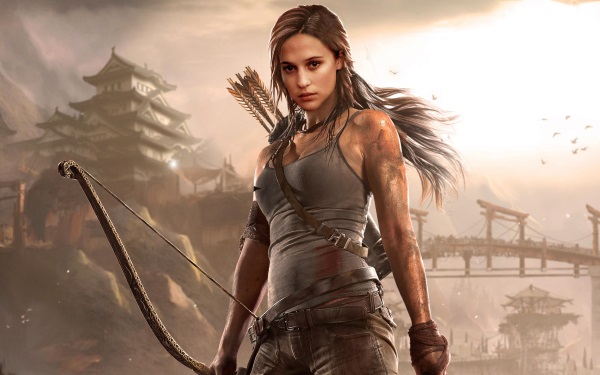 There appears to be no stopping Alicia Vikander. She’s still on a meteoric rise up the Hollywood ladder that has her taking on the coveted role of Lara Croft in the rebooting of the franchise. Not that blockbusters are her priority – it’s simply that she’s a fearless performer who is anxious to explore every opportunity.

In person, she’s enthusiastic, albeit mildly restrained as befits her Swedish stoicism and sense of discipline that she acquired from her rigorous training as a ballet dancer. She smiles easily, however, and gives the impression that she is enjoying her time in the limelight the way someone who never expected to become a major movie star would feel.  Yet she’s also learnt that it’s important to stay grounded.

“My roots mean a lot to me, and I miss my family and my friends,” Vikander says. “I’ve realized during all my travels that you need to find time for yourself and stay close to the people who care for you. My mother is very important to me and I rely on her advice as well as that of my father whenever I’m considering a new project.  That’s become a tradition for me, especially since I haven’t been able to see them that much during these very busy years.”

Her new film, Tulip Fever, directed by Justin Chadwick and written by Tom Stoppard, is set in 17th century Holland during the so-called ‘tulip craze’ era.  The story, based on the eponymous Deborah Moggach novel, revolves around a secret love affair between an unhappily married woman, Sophia (Vikander), and the artist (Dane DeHaan) commissioned to paint a portrait of her and her patrician husband (Christoph Waltz). The Weinstein Company production also co-stars Cara Delevingne, Judi Dench, Matthew Morrison, and Zach Galifianakis.

The 28-year-old Alicia Vikander divides her time between London and New York with her boyfriend of the last two years, Michael Fassbender, after the couple fell in love while making The Light Between the Oceans, which was released last autumn. She will be seen later this year in Wim Wenders’s Submergence, and Euphoria, co-starring Eva Green. She is currently in the midst of shooting Tomb Raider, set for release in 2018.

Together: Alicia, you’ve been traveling and working virtually non-stop the last several years.  Does it ever seem like a dream?
Alicia Sometimes, but it’s one of those beautiful dreams that keeps unfolding.  I love the work that I’m doing and it’s hard to say no to all these projects that are coming my way because you remember how hard you fought to reach this point.

There’s also this fear inside you that tomorrow it’s all going to be over which is something that probably stays with you as an actor your entire life. It’s the nature of the job. And I will always have moments when I’m nervous about how audiences react to my work.  It keeps me focused.

Do you still get nervous when beginning a new film?
Not as much as before.  I remember when I started to work on The Danish Girl and Eddie (Redmayne) would keep telling me: “Oh, sit down and relax.” This really made me feel so much more at ease that I could finally bring to the camera the level of performance I wanted to give. I always place very high expectations on myself.