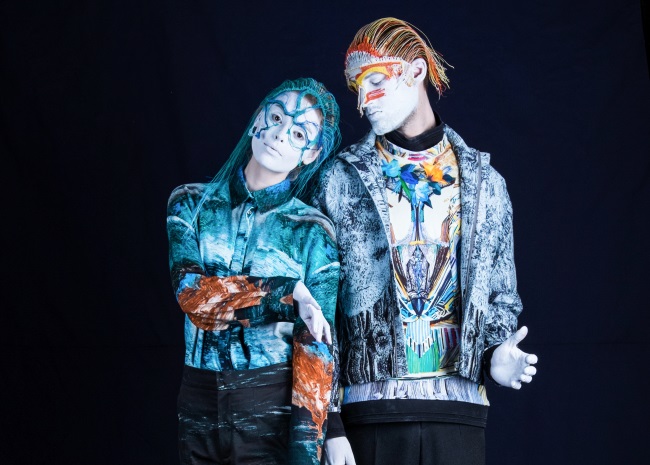 Young Belgian design team Krjst have, since their early beginnings in 2012, proved to be a creative smorgasbord of talent, skill and, most recently, innovation. Erika Schillebeeckx and Justine de Moriamé started out as fashion designers, but they didn’t want to be hemmed in by running Krjst as a clothing label, so they’ve launched a studio concept with a more collaborative, multi-media approach.

Speaking at the Krjst display at Sophie Carrée press agency’s showroom, Schillebeeckx says: “Since the beginning we’ve worked more on collectives with other artists than as designers creating our own label. Even if the central work is design/creation, it’s important for us to look further afield and begin to work with clients outside the fashion world in different sectors.”

The two have just marked Krjst’s new “anything goes” artistic direction with their latest exposition ‘Inception’ at Brussels gallery Atelier Relief. One look at their work and it is clear from the panoply of services they offer – print design, fashion design, photography, brand image – that there is very little these women cannot create. That and they will not be defined.

Schillebeeckx explains: “We’re new in this environment, but what we’re sure about is that we don’t want to put ourselves in a box or be defined by this or that: fashion label, artist, etc. We want to stay open and at the same time create our place using all that we are.”

New they might be, but these enfants terribles of Belgian design have already worked on projects for McAlson, Eastpak, Huawei and have outfitted Stromae for a photo shoot. They also exhibited at Bozar last year during the fashion exhibit ‘The Belgians’ and designed a Minnie Mouse-themed display for Disney’s 60th anniversary last year. Another Star Wars helmet design project with Disney is also in the pipeline for this May.

“All these collaborations really reassured us in the sense that the studio was the right direction to go in,” says Schillebeeckx. “When we were involved with these projects, we felt the most creative. We found we were truer to our own identity.”

While the twice-yearly fashion week circuit still holds appeal, their current focus is the intersection between art and technology and all the possibilities this hybrid of opposite forms allow.