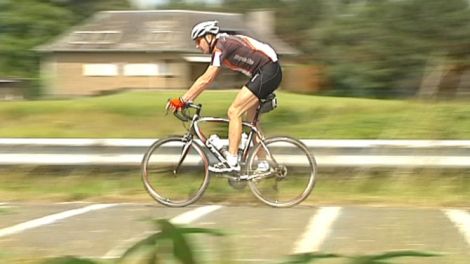 A number of rumble strips to slow down cyclists riding along the River Scheldt are being received with mixed emotions. The rumble strips were installed at various places at the request of the Flemish government as large groups of cyclists were speeding, causing dangerous situations for other cyclists or for ramblers.

Between Ghent and Oudenaarde (East Flanders), a paved road runs along the banks of the River Scheldt. It’s one of the few roads where all motorists are banned, giving cyclists the opportunity to ride their bikes undisturbed over a longer stretch of road. It is not only very popular among cyclists, but also among ramblers. On a sunny Sunday, families migth also seize the opportunity the make a long walk with the children.

However, there was a problem. Big groups of cyclists, sometimes a whole peloton, used the road to cruise at very high speed. The pack took possession of the whole road, making things dangerous for others (individual cyclists or walkers).

The department “Waterwegen en Zeekanaal” (waterways and sea canal) of the Flemish government which is responsible for the road, ordered to installation of rumble strips to slow fast cyclists down. It points to the fact that a maximum speed applies of 30 km/h (19 miles per hour).

Agnes Peil of Waterwegen en Zeekanaal: “In normal traffic, we install roundabouts or traffic humps. We opted for the rumble strips here. We noticed that many cyclists exceeded the maximum speed of 30 km/h and had to do something to make things safer.” She adds that “it is possible that these rumble strips will be installed at other places as well.”

The 23km stretch between Ghent and Oudenaarde now has 2 dozen of rumble strip passages, about 1 every kilometre.

The Flemish Cycling Association regrets the latest developments. “We acknowledge that there is a problem with big groups cycling at high speed, but we would suggest other devices to slow down the speed.”

The Flemish Cycling Association also thinks that the rumble strips could cause problems for those who are not used to them, or for those who don’t have a very stable position on their bike, like older people.

Others argue that this measure targets everyone “also the individual cyclists who don’t pose any danger to others.”