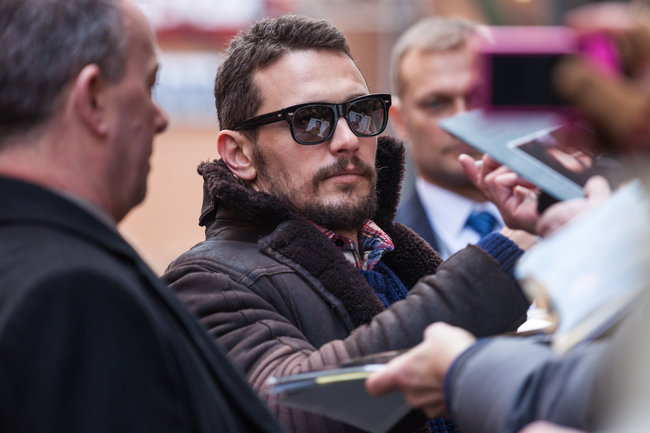 Celebrity: Richard Aldhous meets a very talented actor who is also much else besides…

James Franco is possibly the most enigmatic figure in Hollywood – he’s the man women admire, and men want to be. He is mysterious, understated, moody, yet always ready to offer a glint of humour and hubris to the conversation. Prolific, in work terms, he isn’t… nor does he want to be. He selects film roles carefully, is ambitious in genre yet, ultimately, cautious in terms of volume. “Doing too much is infinitely worse than doing too little,” he says.

For someone now so settled and aware of his place in the movie world, it’s worth pointing out the fact that it is little more than a decade ago that Franco was still disillusioned, disappointed and unfulfilled in terms of his place in the tangled web that is the movie world. He was a rising star, but trapped in a cycle of dissatisfaction with the roles he was achieving. He decided to go back to university to earn a Master’s Degree in Fine Arts and Literature at Columbia, and then a Ph.D. at Yale. He had already lost interest in working in mainstream studio films such as Spider-Man and shifted his focus to indie productions.

He explains: “I wasn’t happy with the films I was making and I had to change a lot of things in my life. I also didn’t have any faith in my ability to get to a point where I could be making interesting films. So, I needed to create a much more interesting and artistically stimulating world for myself.”

Though it seems that phase of his life is clearly behind him now. The actor, director and writer, 42 in April, has switched back to the mainstream and is apparently thriving once again on maintaining a frantic pace. He’s also rediscovered a passion for extolling creative craft across multiple artistic pursuits.

A few years ago, it was noted that no-one worked to the level of Franco – try 12 movies (and a TV series) in 2015, seven in 2016 and 10 the year after. But just three movies hit the screens last year – animated adventure Arctic Dogs, independent self-directed drama The Long Home, and Zeroville, the story of a young seminarian who arrives in Hollywood in 1969, embracing a transitional time in the history of the industry. And in 2020 just blackmail thriller Kill the Czar sits as his major effort.

In many ways, stepping back means stepping up for Franco, something he’s delighted to do. He divides his time between homes in New York City and Los Angeles, and is in a long-term relationship with L.A.-based publicist Isabel Pakzad.

Together: Looking at one of your projects from last year Zeroville, this was a movie that took around eight years to make it out. Is it easy to still feel connected to something that had so many hold-ups?
James Franco: Sure, because it’s enjoyable still, almost always; and if something’s enjoyable you can reconnect with it. We had trouble with distributors and the finances behind it, but the story was always the presentation of a wonderful piece of literature, and the story never changes, even while all around you is chaos.

When you step behind the mechanics of filmmaking, you realize the machine is big, ugly, unrelenting, and it’s about power and greed, and can sometimes feel totally determined by marketing. That takes away a lot of the gloss from what, at the heart of it, is art. It’s a shame, but it’s inevitable. In a perfect scenario, a film reconstructs itself when it hits the cinema screen, and all the rather unpoetic, unfathomable awfulness of trying to get a movie to that final place is forgotten and never spoken about again.

You’re one of only a very few famous people who has tried to reflect on celebrity and performance in your work and in the way you present yourself in public. I see all my work as having a symbiotic connection. It’s all related to each other. When I act in a film, it’s part of a reality where you want to be believed as that character in that particularly fictional reality. I don’t want to draw attention to my actual acting. But in my other work, I’m often trying to draw attention to the fact that I’m a performer in the act of a performance, which makes you think about the process itself.

Is that also because you have so many more interests aside from acting now? Yes. I have so much more going on that I don’t equate my identity with my life as an actor. I feel more deeply connected to art and creativity in general, and I’ve been trying to express myself in exhibitions, writing and now feature films as a director. This is the kind of life I want to have, and I’m trying to make the most of it.