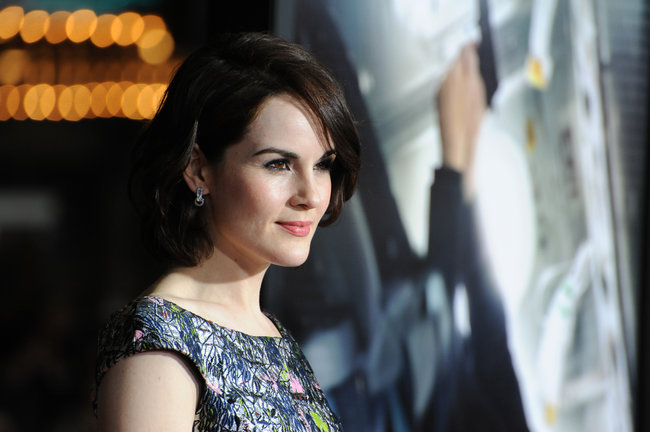 Celebrity: Richard Aldhous looks at an actress whose reinvention continues at pace in 2020.

In all fairness, Michelle Dockery has been away from behemoth that is Downton Abbey long enough to have swerved those go-to associations with Lady Crawley (later Talbot). Yes, last year’s reprisal of the hit British drama did return hearts and minds to Highclere Castle, but the British actress has broken free of period drama with turns in TV series Godless and Good Behaviour, and returns this year in the emotive family story Defending Jacob. She has also starred in big-screen projects The Sense of an Ending and, most recently, The

Gentleman, where she went up against Matthew McConaughey, Charlie Hunnam and Colin Farrell. And yet, despite all of that – not to mention a stint on the West End stage in London playing Diana Christensen in Network – the conversation, somewhat unerringly, always impulsively, feels it should reference a possible return to pantries, servants’ bell boards, mansions and corsets.

“I don’t think Downton will ever leave me,” she begins. “In the early days and when it became really successful, I think I really feared it would be the role that would define the whole of the rest of my life. That sounds a bit strange, but we really went from a TV drama to global adulation in a terrifyingly short space of time, and sometimes, in the throes of that, it’s difficult to imagine you can be anyone else.”

Dockery is correct. From the early episodes of the first series on British broadcaster ITV that offered ratings of around six million, Downton exploded, rapidly ascending to viewing figures above 12 million per episode, and provoking conversations regarding how the export of the show would bring in new fans far and wide. Over 220 countries, including the United States, Canada, Australia and New Zealand, subsequently enveloped themselves in the workings of the house, and by series six over 120 million people were tuning in.

“To see such a British institution be taken forward globally was such a thrill. It definitely changed us as people and as time has gone on, I’ve become much more relaxed about what the drama means in the context of a career,” she says. “I know well enough in myself that I’m pursuing various other projects and making a pretty good fist of them, but I’m beyond the point now where I worry about being defined by Downton.

“If I get to age 70 and I’m still being stopped in the street to be asked when Lady Talbot will next return, I guess I need to be content enough that I was part of something very special; that’s ultimately how I feel about it these days.”

That’s not to say Dockery hasn’t encountered her fair share of unusual encounters with fans of the series. “It has happened where people have reacted in a way where I was a little bit taken aback. I was in a theatre once and I had a woman sitting quite close to me who said that I was ‘a bit of bitch!’,” she laughs.

The philosophical slant with which the 38-year-old paints her career has certainly steered her into a place now where she is content with her lot. The actress may not have returned to the heights of Highclere, but in terms of creative licence she has rarely found herself happier.

She returns this year as Laurie Baker in Apple TV drama Defending Jacob, which tells the story of William Landay’s best-selling novel from 2012. It documents a father coming to terms with accusations that his son may be a murderer.

“I loved the novel, and I feel it is a story that is perfectly told through TV,” she says. “We are in an era now where the small screen is really dominating with so many powerful, meaningful storylines, so it’s very exciting to be bringing something like this to fruition.”

Perhaps of all those who have tasted success on the big screen, Dockery is one of the more deserving. Raised in relatively humble surroundings around an hour north-east of London, she is someone who has regularly gone about her craft with admirable humility. She steers away from showbiz circuit and all that goes with it, despite basing herself in London and LA.