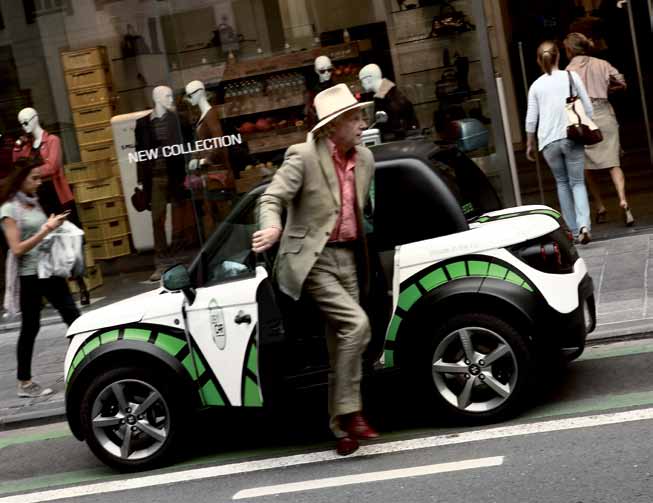 Less of a car, more of an attitude, the electric car is set to make inroads in city driving. Residents of Brussels may now take advantage of a new carsharing scheme giving them temporary use of an electric car any time they’re in need of motorised transport. Geoff Meade took one for a spin and pottered around town

People are smiling and waving, the world is full of happiness and even traffic wardens perk up as I pass by.  I feel as if I’m a cartoon character driving a toy car. One morning I stop at the kerb to pop into a shop. Manuela at a little Italian restaurant has already put the chairs and tables outside on the pavement and is sitting there, watching the world go by, waiting for the first customers to arrive for lunch.

As I park nearby she is wide-eyed and staring. She calls her husband, who comes out and walks over to the car.

He’s peering at me through the window and grinning even before he realises he knows me. His sister-in-law is not far behind, wiping her hands on her apron, wanting to know what’s going on. What? How? Where? they ask. An acquaintance passes by in his car full of children and toots his horn, gives a big grin and calls across with a jolly: “Oh yes! Very cool, Mr M!”  The children wave, and shout “Hurrah!” Or it seems as if they do. The fuss is about my little car. Everyone is delighted by its appearance, before they even know anything about it. 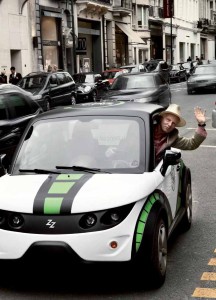 IT’S NO FERRARI
In the good old days I would now have to describe it, but thanks to Google you can save me the bother by typing in “Tazzari Zero” to see for yourself.  I’ll just wait a minute while you do that…isn’t it cute?

Isn’t it exactly like those characters in the Disney movie “Cars”?  A little boxy thing with a smiley front grill and chubby alloy wheels, like a cuddly grinning cat with big fluffy paws.  It’s Italian, so even though the Tazzari is no Ferrari, you’d expect it to go “vroom, vroom” as it pulls away from the kerb or the traffic lights. But of course it doesn’t, because this car, being electric, makes no noise at all. Not a sound. It just moves, without any of the aural backdrop that has heralded motoring ever since the first Model T Ford farted down the road in a cloud of black smoke.  With the Tazzari, it’s as if part of life’s soundtrack has been stolen; it’s like watching a workman operate a pneumatic drill without being able to hear it.

“EVERYONE IS DELIGHTED BY ITS APPEARANCE,  BEFORE THEY EVEN KNOW ANYTHING ABOUT IT”

EVER READY
So what is it? It’s a two-seater town car powered by lithium-ion batteries and with a power cable and a normal two-pin plug where the engine should be. This seems to flummox people: an ordinary two-pin plug? Not a hefty, industrial-style five-pronged plug or something? After all, this is a car, not a hairdryer.  But no, just a two-pin plug that goes in any ordinary socket, and takes six hours to fully recharge, giving the Tazzari a good 100-plus kilometres of travel.

I had the car for three days and didn’t go near a mains socket, although I zipped around town constantly, just for the pleasure of seeing the look on people’s faces. The eerie silence when driving this car is all on the outside; inside, there’s the whizzy sound of battery power, just like an electric golf cart. The faster it goes, the whizzier it sounds to the occupants.  And it can go fast – relatively. There are big plastic buttons on the dashboard. The green one is for maximum energy economy, yellow for more power and red for super-whizzy – or “Race”, as the handbook calls it.

Basically, the buttons denote where on the speed range the power limiter cuts in andthe car runs out of puff.

With the red button lit up, it’s good for more speed than really necessary, but this is a small car and anything above about 70 kilometres an hour gets a bit bouncy unless the road is smooth.  Acceleration is great, though, particularly in “Race” mode. With no engine, and therefore no gears, the power pull is linear. It’s easy to park, brilliant around town and can be plugged in at home or at work provided there’s an extension cord long enough, or a power socket in the garage.

SILENCE IS GOLDEN
Here’s the bad news: the showroom price of the tiny Tazzari is  €20,300 – before VAT – for the cheapest of three hardtop models, or €23,900 for one of a limited edition of 150 convertibles.

So don’t buy one – join Zen Car instead, a Brussels car-sharing scheme backed by the Brussels Capital Region. A network of dedicated Zen Car parking places, charging points and car pick-up spots is growing by the month. For a €40 joining fee, a €6 monthly subscription, an hourly rate of €7 and unlimited mileage, driving around Brussels could be totally zen, a silent experience.

“I HAD THE CAR FOR THREE DAYS AND DIDN’T GO NEAR A MAINS SOCKET, ALTHOUGH I ZIPPED AROUND TOWN CONSTANTLY”

Back to the Tazzari itself: some people say silent cars are dangerous because pedestrians can’t hear them coming, and Toyota is already adding engine sounds to its Prius hybrid model to make it noisy.

This is completely ridiculous; silent cars simply require more awareness from their drivers, all the time. It’s not too much to expect for a quieter world and, if necessary, manufacturers can put a polite reminder on the dashboard, something along the lines of “Silence is Golden” – because the Tazzari is not just about reducing air pollution, but cutting noise pollution too. And having a laugh at the same time.

Win a free subscription to Zen Car plus free driving hours – see the Magazine page 8.  Zen Car is also offering all Together readers free registration if they take out a year’s subscription – simply mention Together magazine.  Offer lasts until October 31.