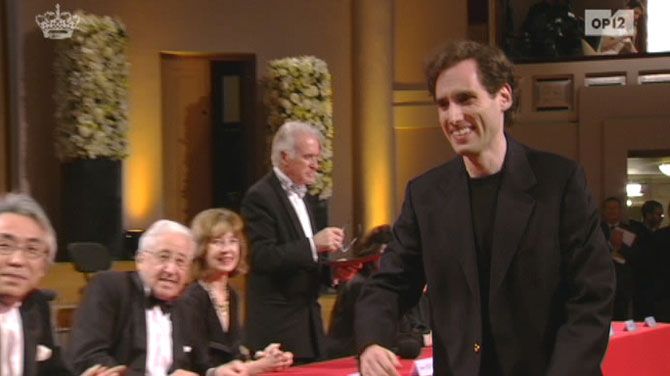 The 2013 edition of the Queen Elisabeth Competition focused on piano. Giltburg performed a well-appreciated programme, which included a Beethoven sonata and a Rachmaninov concerto. The young Frenchman Rémi Geniet had to be content with second place.

Boris Giltburg had already won the Public Award of the Flemish public broadcaster VRT and now adds the very prestigious First Prize at the Queen Elisabeth Competition. The latter earns him 25,000 euros, the former 2,500 euros. Giltburg was born in Moscow but lives in Tel Aviv. He impressed the jury with his originality and emotional performance.”It’s incredible. This feels fantastic. My performance must have been appreciated by the jury. I am very grateful to the jury for giving me first place. I will try to cherish this victory and get the most out of it”, Boris Giltburg said.

The Belgian Dowager Queen Fabiola received a round of applause for her continuous support for the event. Both the youngest and the oldest candidate who had made it into the final did well. 21-year-old Rémi Geniet (small photo) was given the Second Prize, while Stanislav Khristenko of the Ukraine grabbed the Fourth Prize.

There was only one woman among the 12 finalists. Zhang Zuo of China took the Fifth Prize, while the American favourite Andrew Tyson had to be content with the Sixth Prize. The two Belgian candidates for the final were both ousted in the semi-finals.