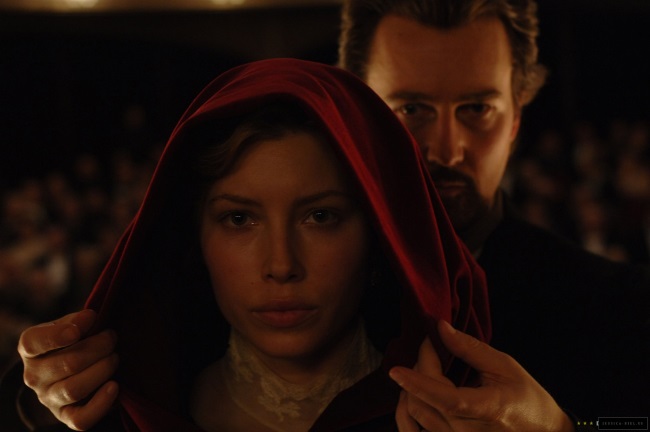 The story is so shocking and really unlike anything that’s been on television before.
It’s so shocking, it’s something I never thought I’d get to work on, it’s not a whodunit, it’s a ‘whydunnit’ [laughs]. We know she committed this terrible act, it was witnessed by this whole town but we don’t know why. And that’s what we’re after, the why. And I guess it’s the first time I’ve ever approached something this dark and psychologically intense and that’s a risk – it’s intimidating but it’s exciting and exhilarating to put yourself out there, far from your tested comfort zone. It will be the first time I’m seen in this light, it’s so far removed from anything I’ve done before and I’m very excited by that. I’m always excited as an actor to be seen a different way. This is the first time where I can really, truly let myself run wild and go crazy. I’m excited by the journey.

This is one of your first jobs since having your son, do you find motherhood has changed you as an actor, and you as a person?

How did you work on something like this, so dark and intense, and then come home, was it difficult to shake off the character?

No, no, I have a two-year-old and that’s not conducive to our lives. I can’t, it’s not practical and I’ve never really been someone who brings it home with me. I couldn’t do it if I wanted to because I’m mom at home, that’s my priority, and dinner, bath times, wallowing in the darkness of the work during the day, is kind of going to get in the way of that.

You’re known for your action roles in Blade and Total Recall, but are you done with that chapter?

I love doing action, doing my own stunts, I had so much fun doing those movies. And I hope there’s more in my future but it’s now about exploring a new direction and seeing what that leads to. If the roles revolve around a certain physicality, that’s wearing, physically and otherwise and I want to try different environments and characters. With a character like Cora we’re probing the psyche, descending to depths that can’t ever be reached if a large amount of focus is on the characters strength and ability.

But I would love to do it again, I know there will come a point where I feel like jumping out of my skin and flexing my muscles, and throw down and kick some butt. That if I still can [laughs].