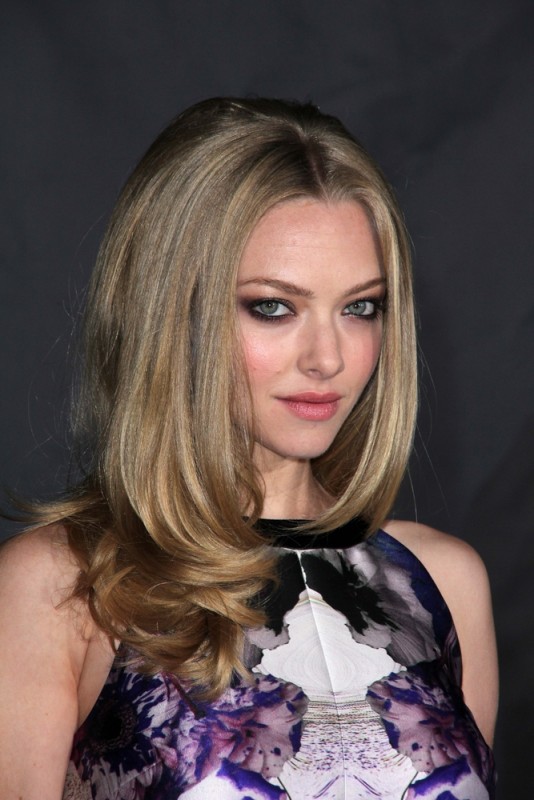 When Amanda Seyfried walked through the gates of Pinewood Studios in London to shoot Les Miserables, she was returning to the scene of her greatest triumph. It was, after all, five years ago on the very same sound stages that she shot Mamma Mia! opposite Meryl Streep. That musical not only became the most successful songfest of all time by scoring $600 million at the box-office, but it turned Seyfried into a proper movie star.

Over the course of the last five years, the Allentown, Pa. native has made very few false moves. She’s had hits (Dear John, Letters To Juliet) and a few misses (Red Riding Hood) but she’s always pushed herself to try new genres like sci-fi (Now), action (Gone) and noir (Chloe).

Making Les Miserables was, she says, like coming full circle.

Beyond giving Seyfried the chance to walk down memory lane, Les Miserables offered the actress the opportunity to take part in a movie that’s already been named one of the year’s ten best by the National Board of Review, netted a nomination for Best Ensemble Cast by the Screen Actors Guild and is a Best Picture Oscar contender for this year’s Oscars.

“`Les Miz’ is the coolest thing I’ve ever done in my entire life,” says Seyfried, 27. “It’s almost like a dream. [Co-star] Annie [Hathaway] keeps saying that, at some point, we’re all going to need to be pinched. We have all been in love with this show forever. It’s just been a great feeling having the chance to finally embody these characters that we’ve all grown up loving.”

Based on the 150-year-old novel by Victor Hugo, the stage musical by Alain Boublil and Claude-Michel Schonberg has been seen by more than 60 million people in 42 countries around the globe. The show played on Broadway for 16 years and won eight Tony Awards.

The film’s main character is Jean Valjean (Jackman), a poor man once imprisoned for stealing a loaf of bread who winds up assuming a false identity and becoming a wealthy factory owner.

Tracking Valjean is a by-the-books police officer named Javert (Crowe). Valjean is being pursued so relentlessly by Javert, in fact, that he can’t intercede on behalf of Fantine (Hathaway), a factory worker who is fired and forced into prostitution in order to support her out-of-wedlock daughter. Valjean does manage to rescue Fantine’s child, Cosette (Seyfried), saving her from her con-artist guardians the Thenardiers (Sacha Baron Cohen, Helena Bonham Carter).

In the years that follow, both Cosette and the Thenardiers’ biological daughter Epinone (Samantha Barks) fall in love with the revolutionary leader Marius (Eddie Redmayne). Valjean, meanwhile, becomes something of a saint who never wastes an opportunity to extend a helping hand to those less fortunate.

Director Tom Hooper, straight from an Oscar win for The King’s Speech, admits he auditioned many actresses for the role of Cosette before being won over by Seyfried.  “I searched long and hard for my Cosette,” Hooper says. As for why he decided on Seyfried, he adds, “Amanda has that amazing ability to command both disciplines [of acting and singing], and on top of that she is mesmerizing on screen.”

Beyond the $61 million film’s epic scope, nothing distinguishes ‘Les Miz’ from other musicals more than Hooper’s decision to record all of the vocal performances live. The tradition in Hollywood is to have the actors lip-sync to pre-recorded tracks. But Hooper insisted on no lip-syncing and no over-dubs.

Seyfried, who rehearsed for nine weeks alongside the other cast members, was assigned a vocal coach with whom she’d warm up daily. Once on set, a radio mic was hidden in her costume and she was given an earpiece, which allowed her to hear the song played live by a pianist.

Since she’s prone to sinus infections, Seyfried put herself on a regimen of Chinese herbs, peppermint and organic oils to stay healthy.

“I was commuting from London to L.A. which was the stupidest thing in hindsight,” she notes. “But I didn’t want to be away from my dog Finn if I didn’t have to be.

“I also drowned in water. I stopped drinking alcohol completely. I barely drank coffee. I had to make sure I got enough sleep and stayed out of the cold. I lived like a monk. We all did it. It was a big lifestyle change.”

All the care was necessary, the actress insists, in order to work up the stamina she needed to meet the role’s extraordinary challenges.

“I quit studying singing when I was 17,” says Seyfried. “I quit being a soprano. When I did Mamma Mia!, it was pop music and they doctored my voice a teeny bit in the studio to make it sound clean.

“I didn’t have that [option] here. I had to be on it. I had to condition my voice because I was singing ten hours a day. I had to hit a high C every take.”

Seyfried has a long history with musicals. As a youngster, she auditioned for a Broadway revival of Annie after noticing an advertisement for applicants at Allentown’s Lehigh Valley Mall.  In preparation for the audition, Seyfried began taking voice lessons. She didn’t get the Annie job but she kept on studying, with an eye toward learning how to communicate emotion through music.

Seyfried’s exposure to ‘Les Miz’ first happened when she was 11 and her parents took her to see the play in Philadelphia. What captivated Seyfried about the show was its ability to blend together a number of different plot strands, including a romance, a redemption saga and a depiction of a populist revolt.

“The range of the story is so wide,” says the actress. “And the music moved me in such a profound way. I remember being particularly moved by the young women, [Fantine] and Epinone.

”When she was 15, Seyfried sang one of Cosette’s numbers during a recital organized by her voice coach. Obsessing about the show for, literally, years gave Seyfried an interesting perspective on Cosette.

“Cosette is, honestly, someone whom I couldn’t really relate to in the show,” says Seyfried. “She is the light of Valjean’s life and Marius’s life. She’s a beacon of hope. But we needed to find a way to make her interesting, and to make people fall in love with her as Marius does. You want to feel the love he has for her. I think, in the movie, she’s more of a woman. She has this inner strength that is just so apparent when you first meet her. And she has a gentleness.

“In the midst of all this trauma, and all these belting voices and the intensity of all the other characters, she’s a source of love and light. I think we made her the true angel she was in the Victor Hugo book, which [you don’t appreciate] when you’re watching the stage show.”

While ‘Les Miz’ has a lot of brutality in it, Seyfried insists she had a great time making the movie, especially when she was able to joke around with Jackman between takes.

At one point, Seyfried fainted on the set, overcome by the excessive heat at Pinewood Studios. When she woke up, “Russell [was] holding my feet and Hugh [was] massaging my neck,” she told the Hollywood Reporter.

Adds the actress, “There was such a nice feeling between us all on set. This movie was such a bonding experience.”

If ‘Les Miz’ provided Seyfried with the perfect bookend to Mamma Mia!, her films in 2013 prove just how committed she is to proving her versatility.

In the coming year, she’ll pop up in three features, all very different from each other. First up is The Big Wedding (April 26), a comedy co-starring Diane Keaton, Robert DeNiro, Robin Williams and Katherine Heigl. Next comes Epic (May 23), an animated adventure from the producers of Ice Age and then Lovelace, in which the actress plays Deep Throat star Linda Lovelace.

What drew her to this trio of features?

“Big Wedding is super funny,” she promises. “The best cast, collectively, ever. I had such a great time. It was like a vacation, making that movie. And Epic is really funny too. I’m so proud of being a part of an animated film.” As for Lovelace, she says, “It was my biggest challenge to date. And I loved becoming a woman who really existed.”