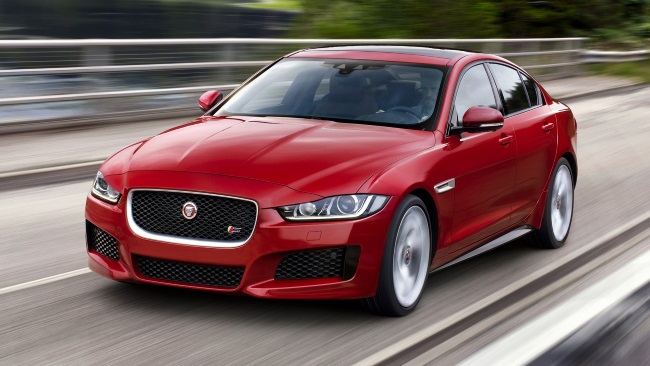 Our motoring correspondent Bob Monard continues his luxury cars reviews by taking the XE for a spin.

Her older sister was born under the sign of X. To her successor just add an E. E for exciting. Normal for Jaguar, whose sales figures have been rising steadily for five years. In addition to the XE, the firm has also added the new XF and F-Pace.

The XE, therefore, takes over the X-Type which appeared in 2001, and we appreciated its design and soundproofing. That was a front-wheel drive and XE is a three-wheel drive – like any self-respecting Jaguar. We congratulate Jaguar, because this is a brand-new car, equipped with 2-litre petrol engines (200 and 240hp) and 3-litre compressor (340hp). It boasts 2-litre diesel and engines with 163 and 180hp. Effective, but not a gas guzzler. A real discovery …

With frowning headlights, a vertical upright grille and an imposing ribbed hood, she certainly stands out and appears even more imposing than her predecessor. From the front you would think it’s a stylish roadster… XF style! As for the stern, we equate that to the Audi A5. Let us face the facts: the XE wants to steal the thunder of the three Germanic vehicles: Audi A4, BMW 3 Series and Mercedes C class. 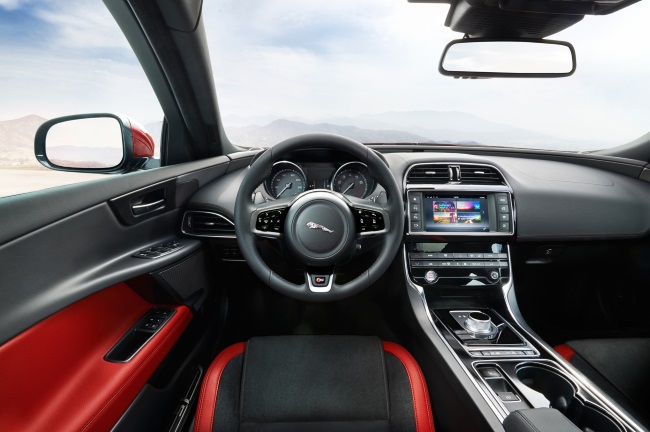 To achieve this laudable and ambitious aim, it retains the firm’s character, inside and outside. The passenger compartment is more upscale than its direct competitors. The dashboard and central console, which combine foamed plastics, hard (unfortunately) and leather with stitching, certainly does not lack class. The layout of the controls, assembly and finish are OK. However, the steering wheel is quite crowded, with too many buttons. There is not enough storage, it can hardly be called generous – however, the seats offer good comfort and sympathetic support. At the rear, the headroom is sufficient and there is appropriate leg-room for most people…as long as larger individuals do not occupy the back seats.

We enjoyed the performance of the new 2-litre diesel 163hp (3.8 litres per hundred!) and the 200hp, both gasoline with 8-speed automatic transmission. On the road, it produces a veritable symphony, better than most luxry cars, as the sound fades, with the speed stabilizing into a cathedral silence. A pure delight. On winding roads, it is a pleasure to drive.

This lively three-wheel drive gets to top speed without swaying at the wrong moment and without fuss. The small steering wheel controls are highly precise, and the directional stability proves to be unflappable. The flattering frame is 75% aluminum.

Measuring 4.672 X 2.075 X 1.416 metres and with a wheelbase of 2,835 metres, this motoring family is very well put together and boasts a multitude of technologies. It achieves comfort on board as well as security, with monitoring progress on the automatic gearbox, corner brake control, emergency-braking assistance, Dynamic Stability Control, hill-start assistance, line-crossing warning, electric power steering, adjustable steering and seats, panoramic glass roof… everything is there to guarantee a journey free of surprises in a refined environment.

Besides its devilishly successful silhouette, the XE is a real pleasure to drive. There is a family sports model available in 18 colours with 94 options and 160 accessories, with three-year maintenance free with unlimited mileage, three-year free support and three-year warranty. Priced from €34,990 and €56,200, it is not spoiled by a few inadequacies – it’s a remarkable global ambassador for the UK.

Jaguar’s history among luxury cars
Founded in 1922 by William Lyons as the Swallow Sidecar Company, SSC took the name Jaguar in 1945. Nationalized in 1966, it joined the British Leyland Motor Corporation in 1968, was privatized in 1984 and acquired by Ford in 1990. Owned by India’s Tata Motors since 2008, Jaguar, its official
name ‘Jaguar Cars Ltd’, has spent spent 80 years producing sumptuous limousines such as the XJ and sports coupés such as the E Type, XJS and XK 8.

The house slogan is ‘Better looks, better drive, better value’. Certainly not impossible! In any case,
it’s all excellent news for this 80-year-old – a great and prestigious ‘feline’.