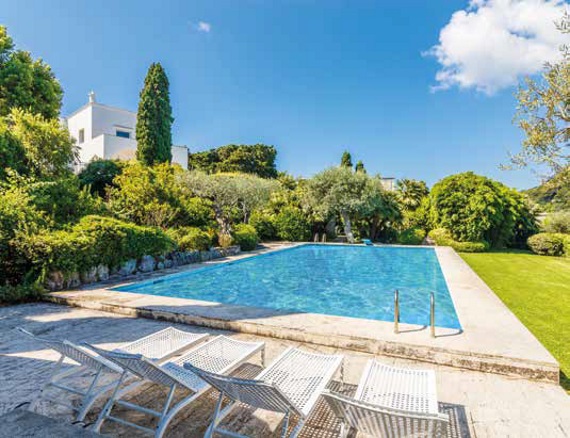 In our luxury villas series we look at his amazing property was once owned by Carlo Ludovico Bragaglia, the director who launched the great Totò.

The magnificent villa where Totò felt at home is in one of the island of Capri’s most exclusive areas; it is surrounded by nature and overlooks the sea, Naples, the Vesuvius and Ischia. Sold by Lionard Luxury Real Estate for over 10 million euros, this villa was commissioned in 1942 by Carlo Ludovico Bragaglia, the director who launched the great Totò in the movie theatres: they made a total of six films together, including the famous Totò le Mokò (1949), Totò Looks for a Wife and 47 Morto che Parla (1950).

Totò commonly referred to as the most popular Italian comedian of all time. Totò spent a lot of time in this villa, either during shooting or when he was on holiday, so often that he even had his own room, which has been kept the same, with its original flooring and furniture, including a big wrought-iron bed, a beautiful painted corner cupboard, and a quaint round table with some newspaper clippings of the period painted underneath the glass.

It is said that Totò was so disturbed by children making noise while he was napping, that he would open his bedroom windows and throw some water at them to make them stop.

The fruitful collaboration between Bragaglia and Totò ended due to personal and family matters after shooting 47 Morto che Parla. Carlo Ludovico Bragaglia, who had not only launched Totò but also Anna Magnani, would go on to direct some of Italy’s most important actors: from the De Filippo family (Eduardo, Titina and Peppino), to Vittorio De Sica and Aldo Fabrizi, who were also often guests in this wonderful villa.