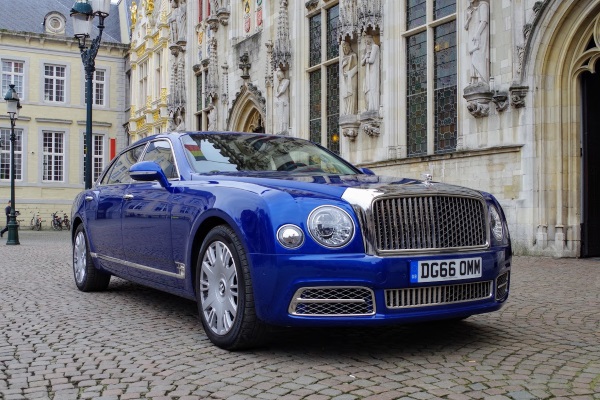 Motoring expert Pierre-Benoît Sepulchre gets behind the wheel of a simply luxurious motor car.

The peaceful force
Malicious tongues in motoring may say that this is the first true Bentley designed in the Volkswagen era. It is certainly the only model which sports the mythical 6.75 litre V8 engine. In any case, this Mulsanne encapsulates what the prestigious British manufacturer does best!

Bentley cars are not simply luxury limousines adorned with leather, precious woodwork and chrome: these English cars have won the 24 Hours of Le Mans on five occasions in the 1920s. The Mulsanne sedan looks to become the symbol of Bentley’s glorious past, as suggested by its name which refers to the fastest bend on the Le Mans circuit, the bend which todays’ racing cars speed through at over 350 km/hr after the Hunaudières straight.

Released in 1980 under the Rolls-Royce banner, the first Mulsanne was certainly no racing car, even if its powerful 6.75 litre V8 engine set it as one of the most powerful sedans on the market. This legendary engine, built in 1959, is, for purists, the seal of authenticity that, still today, is the beating heart of the flamboyant Mulsanne. Brought up to date by Audi engineers, it embodies to perfection the latest technology and the know-how of craftsmen who meticulously assemble this exceptional limousine on their production line in Crewe, UK.

Winged lounge
The sedan version, the Mulsanne Extended Wheelbase, is an impressive 5.82 m long, which makes it 25 cm longer than the standard Mulsanne. This allows for a truly royal interior, clad in buttoned leather upholstery and exotic wood veneers which lend it a plush and rich finish. The interiors are also set off by unique details such as the oculus air vents and the ashtrays in polished steel and the two vanity mirrors inset into either side of the back panels. It can hardly get any more exclusive or luxurious!

But the showstopper has to be the push-button located on the central armrest that opens up a fridge located between the two back seats: slide away the opaque glass panel to reveal a pair of crystal-cut flutes and two bottles of champagne. 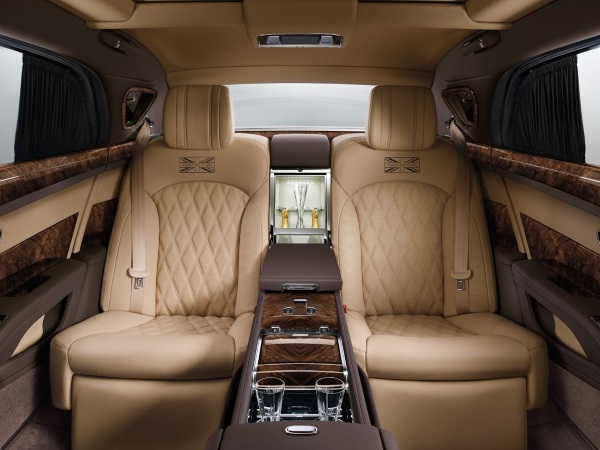 Tradition and high-tech
The Mulsanne catalogue offers all the possible options for your personal customization. Our test-drive model was equipped with a Wi-Fi router, two detachable tablets of the kind you could expect to find on a private jet, and a cordless keyboard. What more could you need to work in complete peace, comfortably ensconced between duck-down cushions, legs stretched out on leather-clad footrests and your neck nestled on headrests designed to cushion in around your head? Last but not least, sliding blackout curtains have been fitted into the car doors and the rear window so that the gentle push of a button can shelter your cocoon from the outdoor chaos.

Iron hand in a velvet glove
Of course, the 6.75 litre V8 engine of today’s Mulsanne had little in common with that of its 1959 motoring ancestor. The engineers in Ingolstadt equipped it with two turbo-compressors, but they also added the most cutting-edge technology, such as direct injection and variable displacement. At gentle cruising speeds and light throttle the engine management system deactivates 4 cylinders, saving some invaluable litres of fuel, despite the car having a fuel tank capacity of 96 litres!

Modern updates notwithstanding, this big-block engine has preserved the charisma for which it was known: a muscular but smooth temperament. This bridled strength is clearly necessary to drive the 2.7 tons of this robust model. But with a titanic torque of 1,020 Nm, responding at 1,750 rev/min, and a power of 505 hp, the Mulsanne cannot be faulted. On the contrary, it can accelerate from 0 to 100 km/h in a mere 5.1 seconds and to notch up to 296 km/h. It is also worth noting the smoothness of the 8-speed ZF automatic gearbox which offers you four different driving modes to slightly adjust the car’s ride to your choice.

On balance…
The Bentley Mulsanne Extended Wheelbase is a delight for both passenger and driver. The incredible legroom allows the rear passengers to stretch their legs without touching the front seat. The luxury of the passenger experience is complemented with top-notch equipment and unequalled comfort and soundproofing. But the drivers’ seat is also an exceptional place to be: with a car so powerful and pleasant to drive, the temptation must be irresistible to give your chauffeur a break and sit behind the wheel instead!