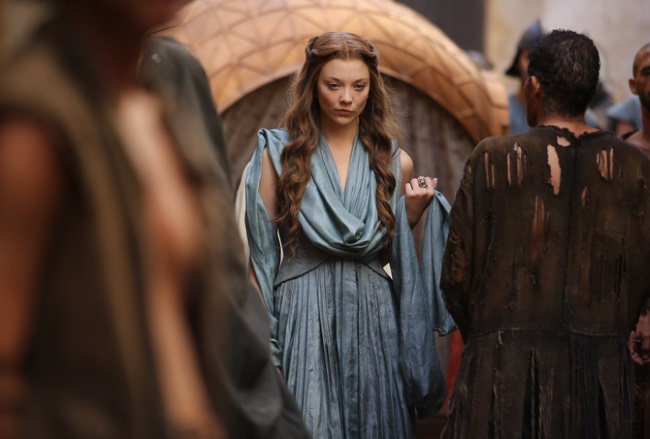 Together sat down with Natalie Dormer, an actress who faced one of her greatest fears when she had to go into… The Forest.

Natalie Dormer is getting accustomed to living dangerously – in her movies, at least. Whether playing Cressida in Hunger Games: Mockingjay, Anne Boleyn in The Tudors, or her recurring role as Margaery in Game of Thrones, now entering its sixth season, the British actress has made her mark as a fearless, independent-minded woman often faced with harrowing situations.

That kind of intrepid spirit is put to the test in her new film, The Forest, a psychological horror story about a woman searching for her identical twin sister who has gone missing in Japan’s infamous Aokigahara ‘suicide’ forest. Though she admits to being “a bit of a wimp” when it comes to watching scary movies, she was drawn to the opportunity of starring in her first horror film as well as playing identical twins Sara and Jess.

“I have more in common with Jess and her adventurous side,” Dormer says. “I do a lot of scuba diving and I’m often curious about exploring sunken wrecks and doing night dives even though that can be scary. What really attracted me was the premise that we all have demons and it was an actor’s dream to be able to play someone like Sara, who has been a control freak her entire life, and explore how she slowly unravels and descends into madness.”

The Forest has already made an impressive box-office debut in North America and sees Dormer go through various stages of real and imagined frights while accompanied on her forest journey by hunky co-star Taylor Kinney (Chicago PD), who plays a travel writer.

33-year-old Natalie Dormer is a product of Reading, England and excelled in school as head girl, vice-captain of the netball team and debating champion.

After studying drama at the Webber Douglas Academy in London, she landed her first role in Casanova (2005) then scored her big acting break as Anne Boleyn in The Tudors (2007-10). While spending much of the last several years working on Game of Thrones, Dormer has also managed to work on several feature films, including Captain America: The First Avenger, W.E., Rush and The Counsellor.

For the past seven years, Dormer has been in a relationship with Irish director Anthony Byrne.  They recently returned to their home in London after attending the Golden Globes awards in Los Angeles together.

Together: Natalie, it must have been both strange and exciting to play twin sisters in The Forest?
Natalie Dormer: It was fun, even though it’s a bit schizophrenic. The dialogue scene between us at the beginning of the film was very difficult. It’s said that acting is all about reacting and obviously in this case I had no one to react to.

You have to imagine that other person, which in this case is me, standing in front of you and what they are saying to you and how they are behaving. And in this case you have to invent your own feelings towards Jess when you haven’t even decided how you’re going to play her. I have so much admiration now for what Tom Hardy did in Legend because he had to do that for an entire film.