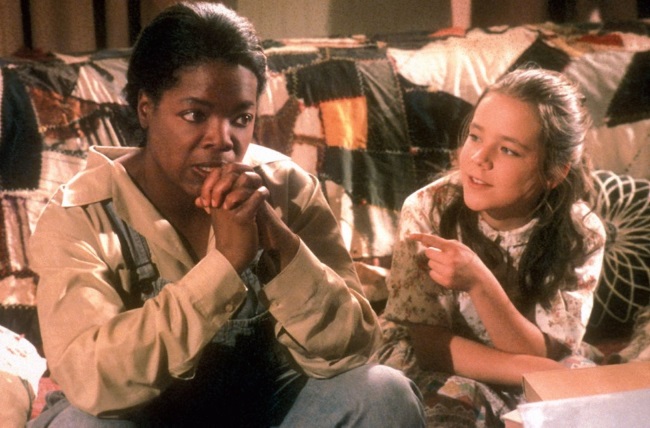 Who were your ‘Mrs’? Did you have mentors?
I had a couple. Some accidental. An editor when I was working in the newsroom in Baltimore, and every night, he used to yell, ‘WINFREY, where’s my copy!’ And I was petrified of him. I used to go to work every day shaking with fear, saying, I know I’m going to be fired,’ because I wasn’t a great writer, I wasn’t fast enough. So, l didn’t get fired in the end, but I did get demoted to the talk show, which was seen as a big demotion in those days. And that’s where it all began. So, I thank him. He was inadvertently a guiding light.

And the other I will say is my great mentor, my treasured mentor and mother, Maya Angelou. I became her daughter, she became my spiritual beacon. And I actually modelled much of Mrs Which on Maya, that’s where my inspiration came from. Maya Angelou and Glinda the Good Witch from the Wizard of Oz [laughs].

And I will be forever known as Mrs Which. I’ll get asked, ‘weren’t you Mrs Which?’ and I’ll say, ‘Yes but I did have a successful talk show for a long time. Doesn’t anyone remember that [laughs]’

During your time hosting the show, or even now, have you ever found yourself star-struck?
I don’t think I’ve ever really gotten star-struck or get star-struck because I tend to live like we are all the same, because we are. Nobody is more or less than the next person which is akin to Mrs Which’s ideology.

But I also can’t get away from the fact that we have heroes and lights we look up to and for me, I had a few moments that come to mind.

Nelson Mandela was a very defining moment for in what he represents for freedom and equality. Sidney Poitier, because I had watched him my whole childhood and his winning the Oscar in 1964 was earth-shattering for me and little brown kids everywhere. And I always remember Diana Ross. That was an overwhelming moment, a lot of tears, a lot of hyperventilating, because I had dreamed of being a Supreme [laughs]

You’re one of the most famous people on the planet, you’ve got first name fame, which is the biggest of them all. Did you give any advice to young Storm, given she’s at the beginning of it?
Fame is an interesting state of mind. Because you yourself, you don’t change, it’s everyone around you who changes. You stay the same. And she will stay the same, she won’t change. It’s who you are within before the fame that becomes magnified. And she is a lovely young kid with a gorgeous heart. That won’t change.