Not too long ago, the self-help world was taken by storm by the book The Secret, by Rhonda Byrne: selling 19 million copies, grossing over $300 million, topping the New York Times bestseller list, and having Oprah as its biggest fan. The premise of the book was that you could achieve everything that you wanted through visualisation and the power of positive thinking. A couple of famous examples from the book recommended visualising free parking spaces when you entered the car park, or if you are single, making extra room in your closet for that special someone. A relative swears by the parking space trick, whereas a friend did meet someone shortly after making space in her closet. Unfortunately, the relationship didn’t last. Maybe she didn’t leave enough room?

What The Secret and many self-help books – as well as business management and leadership gurus – adore doing is getting us to set goals and targets as the key to success.

So life inevitably becomes a myriad of targets and goals. In some cases setting goals and targets work. According to a study conducted late last decade by clinical psychologist Dr. Gail Matthews, at Dominican University, California, she found that people who wrote down their goals and committed to them were on average 33% more likely to achieve them than those who didn’t write them down. A colleague has admitted to me that he’s achieved every single goal he’s ever written down, because he wrote it down. But other clinical studies stated in the Ted Talk ‘Keep Your Goals to Yourself’ by Derek Sivers, showed that telling someone your goals made you less likely to achieve them (even if you wrote them down), because your mind tricks you into thinking you have already succeeded, so you stop trying.

Aside from whether you achieve your goals or not, being goal-oriented can kill you. In one of my favourite books on self-help, Oliver Burkeman’s The Antidote: Happiness for People Who Can’t Stand Positive Thinking, he refers to the 1996 Mount Everest tragedy where eight climbers died in a 24-hour period. The climbers had arrived too late to the summit thus were caught by the darkness, devastatingly cold temperatures and blizzards on their return. But why did they continue to the summit knowing that they would be late? Burkeman suggests a reason: ‘goalodicy’:  they had invested so much in getting to that summit, they had fixated so much on that goal, that not even a suicidal mission was going to force them to turn back.

It’s not only a failed Everest expedition which has called into question the value in setting goals. Burkeman refers to businesses that were so committed to a target, that they failed to see the bigger picture and consequently went bankrupt; or CEOs who achieved their dream of becoming millionaires but at the cost of failed marriages.

Another favourite self-help book of mine is F**k it: the ultimate spiritual way by John C. Parkin. He thinks that sometimes we should just say “f**k it” to plans and goals. Plans and goals can keep us so fixed and inflexible that we may miss out on the bigger stuff, the unexpected, the unpredictable, serendipity. Paradoxically, Parkin notes that by caring less about whether you achieve your goal, you might be more likely to achieve it.

For much of my distaste of The Secret, perhaps I agree with it on one point: it recommends the simple rule of telling the Universe what you want, not worrying about how you will get it, but just having faith that you will.

I had not planned to write a personal development column for Together, but I had an idea: to write on well-being and to share my thoughts and insights to the public. I started a blog; I wrote regularly, but I did not really have an end goal in sight. Several months into the blog, I stumbled across an issue of Together magazine, lying on a window sill near my neighbourhood, with Scarlett Johansson on the cover. I picked it up and flicked through it, instantly knowing that this was the type of magazine I would like to write for. In the Editor’s letter of that issue, Paul Morris ordered us to seize the year: “Carpe diem, quam minimum credula postero, meaning ‘seize the day while trusting little on what tomorrow might bring’.”

I seized the day; I dropped him an email. This March, I celebrated my first anniversary writing a column that I love. 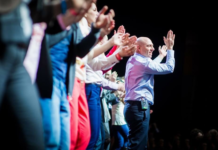