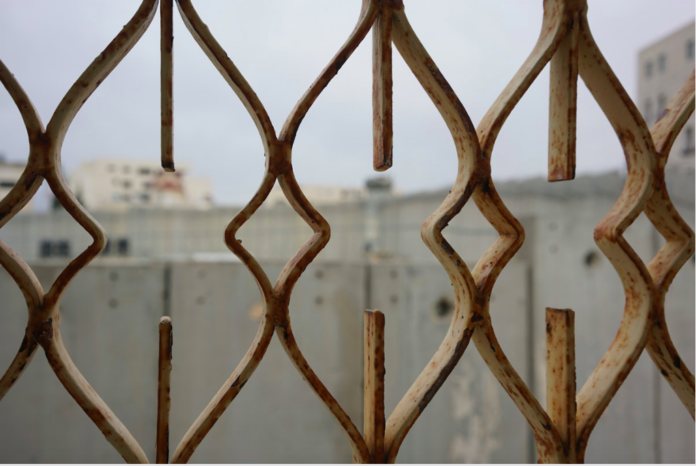 Travel: Catherine Feore went to Bethlehem to stay in some rather unusual accommodation – the Walled Off Hotel.

The Walled Off Hotel known locally as the ‘Banksy Hotel’ boasts “the worst view in the world”. The hotel is right beside the wall that separates the occupied Palestinian Territories from Israel. When I asked a Jerusalem taxi driver to take me to Bethlehem in the West
Bank, he said that he could only take me to the wall and then I would have to walk
across and take another taxi.

Staying in an art hotel was a fascinating, all-encompassing experience. Residents have to sign a fairly draconian form informing them that if something is either damaged or missing at the time of check out, the guest will have to pay an amount estimated by the hotel management. Since a recent Banksy work was sold for $1.4 million, this could be expensive.

The hotel is small with ten rooms as well as a small dormitory. The rooms were designed by Banksy, Sami Musa and Dominique Pétrin. I stayed in the dormitory which was inspired by an army dorm from the British mandate – while basic, it was well designed and comfortable. Have no fear though, if you prefer a bit more luxury on holiday, there are other options, including the Presidential Suite, which even has a tiki bar, home cinema and roof garden.

Every Saturday there is a live concert with performers from Palestine’s music scene,  many artists have trained or teach at the Edward Said National Conservatory of Music. Even if you miss the Saturday performance, the ‘Haunted Piano’ performs pieces composed for the hotel by well-known artists such as Tom Waits and Flea from the Red Hot Chili Peppers “playing jazz piano with his feet”.

You can have a simple meal with a selection of local beers, but the reception staff will be happy to recommend places to eat in and around Bethlehem. Indeed, the staff were helpful on all matters on where to visit and how to get around. It’s as easy to walk into the centre of Bethlehem as get a taxi, but to visit sights like the Mar Saba Monastery, Jericho and the Dead Sea maybe team up with a couple of other residents and find a driver for the day, Ala’a taxi enjoys particular loyalty from the hotel staff – and his contact details can be found on the wall.

Balfour Declaration: The hotel was created very secretively in a disused concrete building over a fourteen-month period. Its original aim was to mark the centenary of the Balfour Declaration of 1917. Balfour, then British foreign secretary, supported by the British Zionist movement, wanted to create a national home for the Jewish people. Sixty-seven fateful words received the imprimatur of the British cabinet. The original plan was for a limited one-year project, but in 2019 the Walled Off is still going strong. In its first year alone, the hotel received 50,000 visits.

O little town of Be-e-eth-le-hem!: Some are concerned that Banksy’s often ludic works might diminish the gravity of the situation in the Occupied Territories. In the book ‘Banksy – Wall and Piece’ he writes: “Palestine is now the world’s largest open-air prison and the ultimate activity holiday destination for graffiti artists.” I can understand how that might make people feel uncomfortable, but the ultimate arbiter has to be the local population and most locals spoke about Banksy and his work in almost Messianic terms.

Aware of the need not just to entertain, there is a small museum with an overview of the agreement and how the Palestinian situation has evolved since the Balfour declaration. It is free to visit for Palestinians and the hotel’s residents. A small shop beside the museum has a selection of books on the region for those who want to learn more.

An art gallery shows the works of up and coming Palestinian artists – when I was there Haya Ka’abneh was exhibiting. However, if you feel inspired by the hotel and gallery you don’t have to be just an onlooker. Popular with children and adults alike, the Wall*Mart (get it) beside the hotel shows you how to create your own stencils, which you can then apply to the wall.

Walking tour of the wall: When making your walled off reservation you can choose to go on the walking tour of the wall and the Aida Refugee Camp. My guide was Marwan who grew up in the camp. The situation is shocking – in one section of the wall, soldiers throw their rubbish from their watch tower, including plastic bottles containing urine into the Muslim cemetery below. Roof top water tanks are shot at, there are regular arbitrary arrests and detention, and the economy continues to suffer, resulting in high unemployment. The population is under siege and if the West Bank is bad, I dread to think of the situation in Gaza.

Israelis describe their need to defend themselves, but the collective punishment of an entire people seems to be disproportionate and wrong. It also begs the question ‘How can this conflict ever be brought to an end?’

In these dark times it is difficult to feel hopeful – there is no easy solution and both sides will alienate their most vengeful and extreme wings it they take the necessary steps to achieve peace. I have some feelings of hope from meeting good people on either side of the wall. The taxi driver who left me at the wall asked me why I was going to Bethlehem and I said it was because I wanted to hear the views from the other side. He seemed to agree that that was reasonable – though he also shook his head and said he thought they (the Palestinians) were stupid, “we give them water, education everything” – which would be hotly contested by the other side. Nevertheless, I saw a small glimmer of hope, the acknowledgement that there was another side, another view, maybe not the “worst view in the world”.