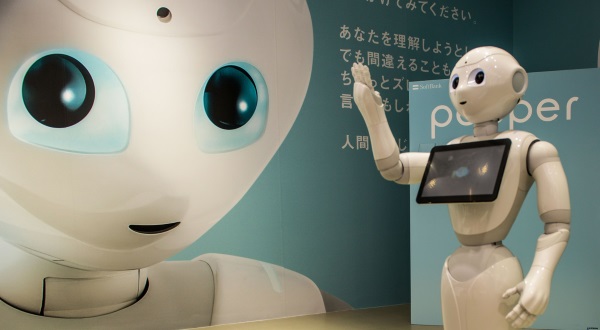 Dave Deruytter looks at the world economy, suggesting that the human to cyborg route may happen faster than we think. Will humans dream of electric sheep?

With robots and robotics on the rise in companies, what is the future of human employment? What will there be left for us to do?

Robots in the broadest sense of the word have been around for millennia. Many religions make reference in their history to supernatural mechanical beings that protected their religious artifacts. At that time, of course, they were imaginary robots, but the fascination was already there very early on.

The term ‘robot’ as such was first used by a man from (the then) Czechoslovakia around in 1920. The first industrial robot was put into service in 1961 in the USA. In the early nineties, the Japanese car industry used very impressive industrial robots. I recall a visit to a Toyota car manufacturing plant near Nagoya at that time. It was forbidden to take pictures, and robot arms were all around us, welding and manipulating parts into nice, finished cars – all done at a high speed.

Half of the employees in the factory looked like very efficient servants to the robots, the other half were controlling checking that the completed vehicle conformed to the set standard. On the subway in those days in Tokyo a clever audio tape automatically announced the next subway station and on which side of the carriage the doors would open. An early hint at software in robotics.

With digitalization and microchip development gaining speed because of global accessibility and low cost, robots are entering every part of our world. They function as receptionists in hotels, teachers at school, companions for the elderly; they also answer the phone in some companies. When searching for the answer to any question, Apple’s Siri and its ‘colleagues’ can be called in for help anytime, anywhere you are online. 3D printers are printing houses and will be creating organs. Robots are doing complex operations in hospitals.

Does anybody still need a human being for work at a company or in a government administration?
Humans need a salary, social security and holidays and they can be moody, particularly on Monday mornings. Robots on the other hand do not complain, but need programming, energy and maintenance. Programming! That must be it then. That is where our future lies. The robots need someone to tell them what to do and how to do it. That is something we humans are good at and love doing: being in command and telling others what to do, including our dogs – we love being the boss. Well, sadly, Artificial Intelligence experts tell us that even that will soon probably no longer be needed. Robots can be taught to do that too. Intelligence and creativity will not be our exclusive turf anymore, they say.

Still, we will have to regulate, govern and police the robots, won’t we? We will not let them take full charge of our world, of democracy, of capitalism. When you look at the way the world is today, they might perhaps make a better job of doing it than we have managed to do so far.