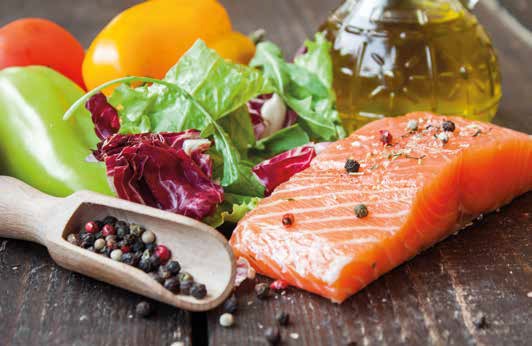 Our nutrition expert Sophie Bruno looks at the connection between our diet and dementia, particularly Alzheimer’s disease.

If you are concerned about your future health, you may benefit from the latest research to help empower you through knowledge to make targeted dietary choices; in practice, this can be achieved by selecting foods and nutrients which could reduce the risk, or slow the progression, of dementia and Alzheimer’s disease.

As a consequence of the global ageing of the human population, the occurrence of cognitive impairment and dementia,especially Alzheimer’s, is increasing in prevalence and rapidly becoming a significant public health burden. The precise causes of dementia are unclear but there is growing evidence that diet is the principal factor in the prevention of dementia and Alzheimer’s disease.

A traditional ‘Mediterranean diet’, which is high in fruits and vegetables, cereals, olive oil, fish and omega-3 fatty acids and low in saturated fats derived from meat products and cheese, has traditionally been associated with longer life expectancy and lower rates of chronic diseases. Recent scientific research has confirmed this association and identified particular foods and nutrients that may be beneficial to long-term brain health.

Antioxidants: Vitamins C and E
Antioxidant vitamins E and C protect the body against the damaging products of normal functioning. Evidence shows dementia sufferers have lower levels of some antioxidants (vitamins E and C) in their blood than healthy individuals. Increasing the amount of antioxidant-rich foods in the diet may reduce the risk, and slow the progression, of dementia and have other beneficial effects such as reducing inflammation and maintaining healthy blood vessels. The best sources of vitamin E are nuts, seeds and rapeseed oil, while vitamin C is found in fruits and vegetables, with the highest concentrations in citrus fruit and berries.

Polyphenols
Polyphenols are compounds which occur naturally in plants and may protect the brain through their antioxidant and anti-inflammatory actions, by reducing the production of toxic chemicals in the brain and by improving the functioning of blood vessels. Both green and black tea have been linked with a reduced incidence of dementia and a moderate intake of red wine (up to 2 glasses a day) can benefit both brain and heart health. Other foods which have been shown to be beneficial are dark chocolate, cocoa, soya and a variety of fruits and vegetables.

Selenium
Selenium is a mineral found in food which is essential for human health, with recent studies identifying a strong link between low levels of selenium in the body and a decline in brain function. The best dietary sources of selenium are liver, kidney, brazil nuts and seafood. If selenium-rich foods are not eaten regularly, it may be advisable to take a supplement of 50-100 micrograms a day.

Dietary fats: omega-3s
Some dietary fats are thought to be beneficial to brain health while others may be detrimental. Evidence highlights the protective role of long-chain omega-3 PUFA in cognitive decline, found in oily fish such as mackerel, herring, salmon, sardines, anchovies and fresh tuna: this may help to slow cognitive decline, especially in the early stages. However, the evidence suggests that consumption of whole fish is more advantageous than supplementation, perhaps due to the additional nutrients in fish which may act synergistically to reduce cognitive decline. It is recommended to eat at least two servings of fish per week, one of which should be oily.