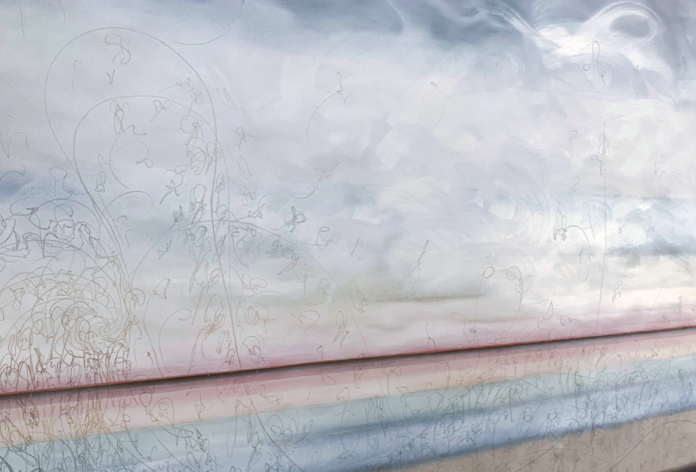 This vine grew on Naxos as though it were the first. I was on Naxos to do research for my ongoing project. A mind divided is no temple to Apollo. The vine thrust from the earth behind the house where we ate and slept. I was reading The Sonnets to Orpheus at the table behind the house. “Leaf of my word”. I began drawing the vine; writing it, as light shifted above and below. I say below, because I sat with the vine on the edge of a cliff, and, from our perch, sky and sea moved together as the hours passed. “Wave whose sea I gradually become”.

The sea and sky moved together and never move. I saw the vine as a consolation, an apologia for hard geological time that was tended to us by nature. I drew it every day, and with time the vine became like an organic version of Barnett Newman’s ‘zip’, something a person could grab onto whilst the universe revolves in its cold and perfect Real. Back in the studio, as the drawings developed into paintings, the paintings split into two directions. One, a quiet geometry of sea and sky; the other, the life of the vine, the leaf of my word. Until 28 September. Galerie Flore – Amaury de la Moussaye, Brussels. www.galerieflore.com