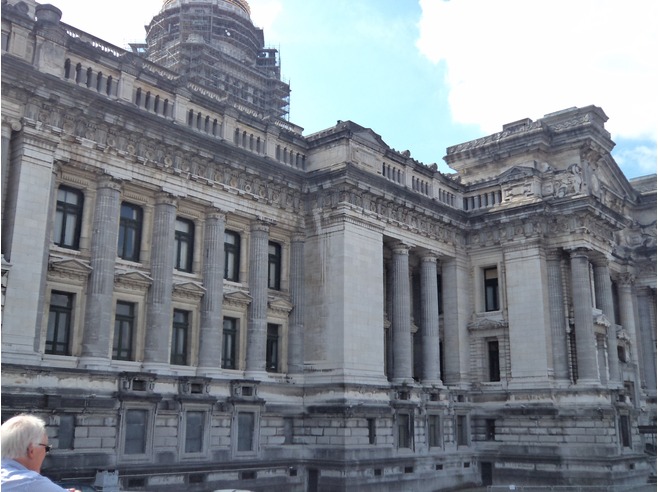 The iconic law courts of Brussels, the Palais de Justice, one of the largest buildings in Europe, is to be transformed in part into a giant shopping centre.

Some 45,000 m2, of the massive structure is being released for use as shops, catering areas, cultural activities, tourism and trade.

The dome is expected to become a tourist attraction, while the upper floors will remain reserved for some of the courts who will continue to occupy the palace, in particular, the Court of Cassation (appeal courts). The lower floors in the base of the building will host new facilities.

The shopping mall will be of a similar size to Antwerp’s Wijnegem Shopping Centre. Located just a stone’s throw from Avenue Louise and the upmarket boutiques of Boulevard de Waterloo, the shopping centre should boost the attraction of this area for shoppers of all budgets. It will also be a serious competitor to the other major shopping centre projects in and around Brussels.

The decision on the transformation of the Palais de Justice was confirmed by the spokesperson of the Secretary of State for Public Buildings, Verherstraeten Servais (CD & V). After a series of problems with security in the building, the government had already decided to devote the courthouse to private activities.

In an unrelated decision, the Brussels stock exchange ‘the Bourse’ is to be transformed into a ‘Temple to Belgian Beer’.

This will be the new use for the grand 19th century building near the Grand’ Place, which is fronted by Corinthian columns and resembles a classical temple.

The Brussels Bourse was abandoned by stockbrokers in 1996 after the computerisation of the financial markets and then became a site for temporary exhibitions. But the building has fallen into disuse since municipal authorities took it over in 2012.

After a 15-month study Brussels authorities gave the green light to a plan to make a temple to Belgian beer, the country’s most prized export, in partnership with the Belgian Brewers’ Federation.

“Beer is to Belgium what wine is to France; it gives our small country a real identity,” stated Sven Gatz, the president of the brewers’ federation.

Exports of Belgian beer have soared 70 per cent over the last decade, with 62 percent of the beer produced last year now shipped abroad.