In the mid-2000s, Bruno Van Gils decided it was time to do something about what he saw as the two ills of contemporary suit fashion – a lack of affordable, high-quality suits and the overwhelming abundance of garden-variety models. The third-generation offshoot of a family that has been in the suit-making business for 50 years, he figured he could do better. After some deliberation and a couple of phone calls he launched, with his cousins Angelique and Saskia Van Gils, the tailor shop Café Costume in 2007, in the process infusing suits with a bit of rock ‘n’ roll.

“Most of the suits that were low in price were also low in quality,” Van Gils explained, looking back one recent Friday afternoon. He should know. A drop-out from Antwerp’s celebrated fashion academy, he learned the ropes at the suit manufacturer The Makers, the Van Gils family-owned business. “The other thing was that if you buy a suit off the rack, it’s always predefined,” he said, adding that in fact every man has his own particular build. “A lot of these concepts in tailoring, they offer one kind of fit, one kind of style.”

Van Gils, in a fitted jeans shirt, khaki chinos and brown loafers, is sitting on a folding chair outside the Antwerp shop. Inside, French chansons play softly in the background. The shop – which Van Gils describes as “a tailor’s shop in an art gallery” – was renovated last year to twice its original size. Unlike the Kortrijk, Ghent and Brussels boutiques, it boasts both an accessory and a measuring room. Two twenty-something sales assistants – slick haircuts, dressed to the nines – are helping overwhelmed-looking customers with fittings. Artful black-and-white photographs line the walls. One is taken from Café Costume’s summer campaign. The picture shows skate shop owner Sven Aerts suspended in a mid-air jump, with his tuxedo clinging as naturally to his body as the skateboard to his feet. The incongruous collection of a Singer sewing machine, disassembled vertical pianos and books with titles like Sex and Suits across the vast, bright interior bring home the message in case the suits themselves didn’t: this is not your typical tailor shop.

With a variety of designs that can be tailored to a particular customer’s shape, Café Costume offers affordable, high-quality made-to-measure suits, with prices ranging from €450 to €950. After a fitting session, patrons can choose the fabric, the lining, the pockets and the buttons of their suit to their whim. Suits come in three fits: the Savile, Florence and Paris. Lining options include hand grenades (‘Yes We Can’), sushi (‘Chopstick Paradise’) and crawling insects (‘Ants in My Pants’). “Everything we do, we try to do with a twist,” Van Gils says. “‘To dress it down’, we call it.” And that fits with the gospel Café Costume has been trying to spread from its early start-up days onward. Explaining that suits can be part of men’s everyday wardrobe rather than just formal or business attire, he says: “I believe that we need to teach people how to wear suits.”

When they started out, Van Gils drew up a list of five male celebrities he wanted to dress, five people he felt would enhance their brand. The deejaying duo Soulwax was top of the list. Not long after Café Costume launched, Van Gils was working upstairs when he got a call from a close friend, a photographer. “He said: ‘Bruno, we need some suits for Soulwax. Could you maybe help me with that?’”

That was the first time Café Costume dressed a high-profile celebrity. Since then, the Van Gilses have been able to check every name off their wish list, becoming the go-to suit maker for musicians, actors and writers. Artists spotted in their suits have included rapper Baloji, the director Michael Roskam and actor Matthias Schoenaerts. “Now, we’re looking more at international people,” Van Gils says, with a smile.

Unsurprisingly, Café Costume’s budget-conscious approach to suit-making has proven recession-proof. Over the past six years, the Van Gilses have added three shops across Flanders, and business has been and still is consistently good. At the flagship Antwerp shop alone they sell 50 suits per week. So what inspired him to get where he is today? “Starting up a business like this, you believe that it should work, but I could not hope or wish for more than this,” Van Gils says. “This is perfect.” Still, he can’t quite put his finger on what has made Café Costume resonate so much with thirty-something men. He suggests the explanation might lie in the past. When he grew up, casual was really all that mattered. “We wore jeans constantly,” he says. “Now, I’m 35 and I love suits because it’s something new for me. So I believe there’s something about my generation that likes suits, that is actually interested in these suits.”

Popular culture too has helped. Citing the ubiquitousness of suits in popular television, magazines and music, Van Gils says: “It’s everywhere. I know it’s not gonna get better.” He glances up at the store in front of him. Fidgeting in his seat, he says: “I’m very interested in what’s going to be happening next. I do realise I’m on top of the wave.” 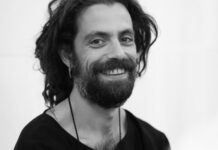