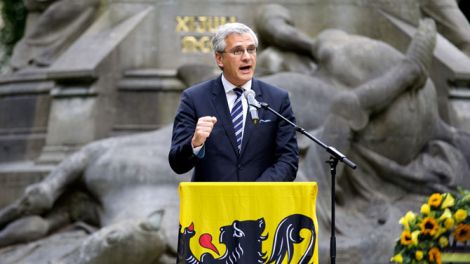 As the people of Flanders celebrate their National Holiday on 11 July they are harking back to the Middle Ages when courageous Flemish townsfolk defeated the army of the king of France at the Battle of the Golden Spurs. This battle when the defeated French knights left their golden spurs on the battle field prevented the conquest of Flanders and allowed northern Belgium to continue to develop as an independent entity.

On the occasion of the National Holiday Flemish Premier Kris Peeters was keen to jump to the present day and stress the results of the state reform package, the final details of which have just been agreed. Mr Peeters said that both with regard to powers and to funding Belgium’s point of gravity had now passed to federated states.

Still, the Flemish leader was also keen to stress that northern Belgium faced great challenges. In order to meet these Mr Peeters unveiled plans to cut wage and energy costs. This should be achieved in concert with Belgium’s other five governments.

Mr Peeters insisted that prosperity could only be maintained, if these costs were addressed: “Today I am clearly putting the question to each and every person with political responsibility in Flanders, Brussels and Wallonia and in the federal Government: who has the courage to join us? Who will work with us to draw up a powerful Competition and Employment Pact?”

Mr Peeters was speaking in Kortrijk where in 1302 the French knights were forced to retreat.

“We have faced enormous challenges in recent years. The economic crisis made us bend, but we did not break.”

Mr Peeters also pointed to the importance of the recent joint trade mission to Texas that he headed together with the Dutch Premier Mark Rutte: “By joining forces with our Dutch neighbours, more doors will open for us.”

The Flemish Premier insisted that work to modernise the labour market should continue in consultation with the social partners: “We are making a warmer society. The education sector too needs to be reformed.”

Mr Peeters is convinced that the 6th state reform package will enable this: “The Flemish budget will rise from 27 to 38 billion euros. This is an increase of 40%.”

The Flemish leader also issued a warning: “New funding legislation will mean that Flanders will be more reliant on its own economic growth in future. We will reap rewards if we do well, but will bear greater responsibilities if things go wrong.”

“Additional efforts required to balance the budget will be considerable. Everybody must be ready on 1 July 2014.”

This is the date on which the new state reform becomes operational.