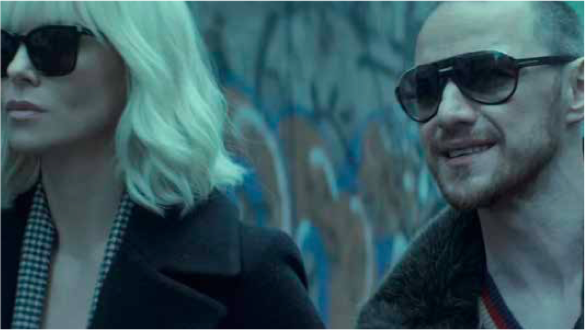 Celebrity: Together sat down with a young Scottish actor James McAvoy whose rise is nothing short of meteoric.

Having been the scary guy in Split, James McAvoy is now on the other side of the fear fence. It sounds like the grass is certainly greener for him, judging by his comments of being completely disturbed on the set of the forthcoming concluding part of IT. Were it not, though, for a visit to his school by actor David Hayman – when McAvoy was just 16 – his career path may well have headed in a very different direction – the priesthood was an option, he had already been accepted into the Royal Navy, and he’s also been offered a place at the Royal Scottish Academy of Music and Drama.

Hayman’s visit cemented for McAvoy the desire to move forward with drama – he’d soon moved to London, and his 2004 break as car thief Steve McBride in Channel 4 dramedy Shameless set a career in motion. Big screen roles followed in The Chronicles of Narnia and The Last King of Scotland, but his biggest impact came in Atonement opposite Keira Knightley.

Franchise films have taken over recently, and his appearances as Professor Xavier inX-Men: Days of Future Past and X-Men: Apocalypse lifted his profile even further. However, perhaps it was his immense performance in M. Night Shyamalan’s Split as nine disturbed personalities that cemented his invitation to take on the adult version of character Bill Denbrough in the second instalment of Andy Muschietti’s adaptation of Stephen King’s book, in the forthcoming IT: Chapter Two. Set 27 years after the first, Pennywise terrorises the Losers Club as they come back to Derry to battle the killer clown.

Together: So many people are excited to see the second instalment of IT. What can you tell us about the film and what was it like to shoot? James McAvoy: I really enjoyed shooting this movie, especially when you get to do that with a bunch of really great actors and an amazing director. The cast is absolutely incredible. All of that was something which I was really proud to be a part of. However, there were times when I was thinking to myself that what was going on was extremely disturbing. You are kind of looking around at each other thinking: ‘This is really messed up [laughs]’. Messed up in a good way, though.

There have been rumours you had quite a stressful time on set. It was a freaky shoot and there was lots of freaky stuff going on and those images we had shot on the day would literally be coming back to haunt me during the night. I’m not someone who gets scared easily and I read the book as a kid, but it didn’t have the same effect on me as it did when I went back to it as an adult – I am being serious when I say that it left me with nightmares. I think it was because what I was reading was then being recreated in front of my eyes.

What Bill (Skarsgård) does with Pennywise is really incredible. Yes, he is dressed as a clown and he obviously wears the scary makeup and a funny voice, but the level of commitment to the character and the sheer amount of effort which he puts into it… it’s nothing short of remarkable. What he does is disturbing, just as he was in the first film.

I am told that I can’t say too much about it and him, specifically. I have had press notes telling me not to talk too much about Bill and bits of other things to avoid mentioning, as well. What I can say is that he was pretty disturbing on set and that once he had done his bit, all of us adult actors playing ‘The Losers’ were vocal about it being so uncomfortable. [Laughs].

I think the job of an actor is to enable an audience to suspend belief. In this instance, it was the actors suspending belief too, and the more we delved into that psychological imprint the more difficult we found to climb out of it.