The Batman
One thing is clear. This nearly-three hour blockbuster is also very dark on the lighting front – so best not to go if you are tired. Director and co-writer Matt Reeves’ classic was always going to be better than its predecessor – a film that Ben Affleck would probably rather forget. Christian Bale and George Clooney’s Batmen fared better. Reeves’ The Batman, based on the DC Comics, is closer to the original 1966 version. It focuses on Gotham City’s underworld when a sadistic serial killer (the Riddler, played chillingly by Paul Dano) leaves behind a trail of cryptic clues after killing the city mayor. Robert Pattison, very convincing as Bruce Wayne operating as the vigilante Batman, is reinvented as a rock star recluse. He needs to find the killer helped by the police department and then finds out to his dismay that his family is involved. The excellent supporting cast includes, as well as Dano, Colin Farrell as the Penguin, Zoë Kravitz as a feisty Catwoman and Andy Serkis as the villain Ventriloquist Alfred Penn. Random trivia – Pattison’s attempts to choose a different voice for Batman were deemed atrocious and the film brought his girlfriend Suki Waterhouse to tears. Reviews: IMDb 8.4/10, AlloCine 4.2/5, Rotten Tomatoes 85%
Running time: 178 minutes

Belfast
Kenneth Branagh’s “most personal film” is a semi-autobiographical account of 11-year-old Buddy – a young working class boy’s childhood during the tumultuous late 1960s in the Northern Irish capital. The cast is starry, with James Dornan excellent as the typically Irish occasional gambling dad, Caitriona Balfe magnificent as his continually worrying mum and Judie Dench wonderfully quirky as his grandmother. The period details are amazing and the film’s drama and authenticity is heightened by being shot in black and white and by its Van Morrison score. A Belfast native himself, Morrison provided a new song ‘Down to Joy’ for the film as well as classics like ‘A Bright Side of the Road’. Buddy (Jude Hill) is the natural star of the often nostalgic show. His escapades, including attempts to steal sweets or laundry detergent with his cousin Moira, bring humour to what could be a dark film set in streets divided by the Troubles. As Catholics and Protestants clash and the family decide to move, Buddy continues to hope he might marry his sweetheart Catherine – even though she’s a Catholic. Reviews: IMDb 7.3/10, AlloCine 3.7/5, Rotten Tomatoes 87%
Running time: 102 minutes

Un Monde
Any parent about to send a child to primary school should possibly not watch this film. It is a chilling, gripping immersion into a child’s world – the school playground and all its terrors. Seven-year-old Nora (played incredibly by Maya Vanderbeque) hugs her father desperately before starting a new school with her beloved 10-year-old brother Abel (another fantastic performance by Günter Duret). It gets a whole lot worse when she realises he is the subject of vicious bullying. Caught between the demands of her father to tell all, of her brother to keep quiet and her own desire to fit in, you see all the time her struggle with loyalty. Director Laura Windel shot the film in Forest’s Athénée Royal Andrée Thomas [in the 2021 summer holidays] at child’s level. You rarely see the adults’ full height, this emphasising the tension and drama. No judgements are made and there is no happy ending. But as well as horrific set pieces there are lighter moments with Nora and her friends in the canteen. And the original and authentic dialogue is mainly made up by the child actors themselves. French, Dutch subtitles. Reviews: IMDb 7.3/10, AlloCine 3.7/5, Rotten Tomatoes 100%
Running time: 72 minutes 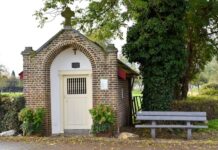