Gemma Rose met up with the founder of The Library, a woman defies the conventional office.

If there was an ‘ugliest office’ title, mine would hold it. I have what appears to be a cross between a cubicle and an office. It’s an office because I have four walls and a door, but it’s a cubicle because the walls are flimsy and detachable. The walls are dull; the linoleum floor is dull; the fluorescent beams are blinding; and the furniture is bland, uncomfortable and sterile. To top it off, my office is adjacent to a heavy, secure exit, since it’s located on the main thoroughfare of the building. The door is pulled open and slammed shut about a hundred times a day. After four months of enduring this, my ears hurt.

“Why should we accept a work place being so ugly?” asks Anne-Sofie van den Born Rehfeld, the founder of the Brussels-based co-working space, The Library. “Why should we buy ‘office’ lamps – which are usually ugly – for the office, just because they are called so? An office doesn’t have to look like an office.”

This reasoning sums up The Library quite perfectly. The Library’s members can opt for co-working spaces, private offices and meeting rooms, in prime locations in Brussels. Its aim is to make the office feel more like home. “I decorate it like I would my own home, and the members treat it well because they see the effort that I’ve put into it. They appreciate it and therefore feel protective of it,” explains Anne-Sofie.

She shows me around the Ambiorix premises: a stone’s throw away from the art nouveau curiosity, La Maison Saint-Cyr. The Library is a converted maison de maître, with high ceilings and luminous spaces (“Danish people believe it’s a human right for places to be well lit,” she remarks). Each room – whether it is a meeting room, office or bathroom – is tastefully, thoughtfully and personally furnished, with light touches of humour here and there. She uses Nordic colours: calming whites, blues and greys to create this cosy sanctuary. Plus, less is definitely more: no clutter or clunky furniture, just simple, mostly custom-made pieces, with usually block colours. The wooden meeting-room, coffee and dining tables are made in Denmark; and the lights are designed by up-and-coming Danish designers. Sustainability, authenticity and ingenuity are key components to Anne-Sofie’s furnishings – for example, in a corner stands her great-grandmother’s stove, which her mum retiled into a side-table.

Seven years ago, when Anne-Sofie first arrived in Brussels from Copenhagen, she was lonely. “I was working from home as a consultant, married, with a six-month year old daughter,” she says. “You don’t meet people when you work from home.” At her daughter’s crèche, she met another Danish mother in a similar set-up. To stave off the loneliness, they decided to work at each other’s houses. Anne-Sofie had toyed with the idea of signing up to co-working spaces, but she found them too corporate. “I missed getting dressed in the morning and meeting people. But I also wanted to work in a place that felt like home but still had an office infrastructure.” 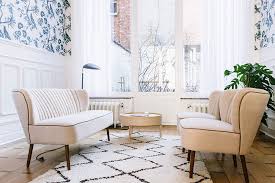 square Ambiorix. There are 100 members in total and each house is almost at full capacity. The Library runs many social events and workshops to support its members, from krav maga to managing one’s finances.

Setting up the business was not smooth sailing. “When I first started describing the idea of The Library, all the people you need to start a business – accountants, estate agents – just didn’t get it,” she says. Not only did she have the challenge of conceptualising her idea to get people on board, she also had to find the right house to rent. She invested all her savings into the idea. The nights were sleepless, and even today, they still can be. Nonetheless, the factors that keep Anne-Sofie going are self-belief, the acceptance that risk is uncomfortable and delayed gratification. “The harsh reality of what I have to pay out every month is pretty scary,” she notes. “But, if you want to build something, it doesn’t come without risk. This is where being good at delayed gratification comes in, because at one point, I know I will be comfortable.”

The gamble is paying off. The old days of filing cabinets, dreary offices and tiny cubicles are opening up to space, light and comfort. Even for the innovative players, like Google and Coca Cola, the ‘office as a play pen’ concept is becoming outdated and rather, the trend is moving towards the ‘office as a home’. Design publication The Spaces, which explores new ways to live and work, writes: “Today’s best co-working spaces are conceived as just that – places people would happily live in. And it’s the little touches of domesticity that make the difference.” As Anne-Sofie recognizes, work and home life is becoming more fluid, and consequently she hopes that The Library helps to “win some of your life back”.

Designing office space in such a way makes the business itself more attractive. “Outstanding!” beams a member, Jacqueline, who runs a small consultancy firm. “The Library inspires you to come to work. Everyone here is really welcoming, and it has a nice balance in that it pleases our more corporate clients while not putting off the smaller ones.”

According to the book Cubed: A Secret History of the Workplaceby Nikil Saval, the workplace began with the rise of the factory in the 19th century and then of modern business (accounts, insurance, shipping, banking). Imagine dimly lit cubby holes by candlelight at the beginning. Then, the 1920s office was characterised by rows and rows of steel desks, with piles of paperwork. In 1968, the workstation was introduced, made up of three sides with interlocking, adjustable walls, joining at 120 degree angles; bright-coloured storage units; a desk and a chair. Soon enough, the angles became right angles and the workspace smaller, which led to the creation of the dreaded cubicle. Thankfully, Saval believes that the cubicle will soon die out as a new way of working emerges. Whatever the future of the workplace will be, one thing is clear, people need community, company and companionship. These needs are what encouraged Anne-Sofie to fulfil her dream.

The Library’s namesake is thanks to the library of Anne-Sofie’s childhood in Denmark, where her mum was a librarian. She remembers it as a cosy, warm and friendly place. Her mum also played a key role in setting up the business. “My mum is such an inspiration,” she says, “she is very brave, and she must have given me that belief in myself.” After an afternoon at The Library, I come away with a deep admiration of Anne-Sofie’s achievement. I also come to the conclusion that The Library is an allegory for generosity and bravery, as well as being an homage to her mum.
www.thelibrarygroup.be