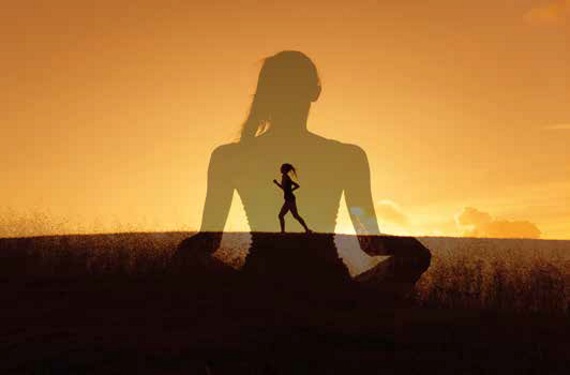 Karen Northshield looks at the mind, a very underused facility.

It is a commonly held belief that we only use up to 10% of our brain’s capacity. That leaves us with 90% of untapped potential to explore. Our minds are incredible machines and can be our greatest asset but can also be our biggest barriers. The latter happens when we engage in self-limiting thoughts or give impetus to negative emotions. Henry Ford once said: ‘‘Whether you think you can or can’t, either way you are right’’. Either way, we are capable of more than we think. Each one of us has potential far beyond our limitations and capacities. So the question is, how do we uncover the hidden 90% of our potential and bring it to use?

As we are often caught up in our minds, we have a tendency to ignore the body’s intelligence. Our minds are powerful but the body has an intelligence of its own too. What if we were to delve into the layers and depths of our body’s intelligence? The body is constantly speaking to us in highly intuitive ways. Our body is like an ocean, rich with hidden treasures.

We are told that meditation, relaxation and other classical self-healing therapies can increase our mental awareness. When the mind is at rest is when awareness takes place. But how often do we give time for our minds to rest? Unless we actually submit to the process of conscious self awareness, we can easily remain captive to our mind and cease our mental expansion. However, there are other routes to explore that can lead to revealing our potential. Our bodies.

Take the following example which illustrates the body’s natural instincts and intelligence: if you were in a situation with a perceived threat to your life, your body would react instinctively to preserve itself. This is called the fight-or-flight response which is a natural physiological reaction. In such a case the body reacts spontaneously without waiting around for instructions from the mind. So how is it that the intelligence and speed at which the body reacts can surpass the mind’s authority? We often think the body is submissive and subordinate to the mind but the body’s intelligence is infinite in so many ways we ignore.

Body and mind are inherently complementary and interrelated. Each has their own intelligence as they co-exist. The body without the mind has no purpose. At the same time the mind can be manifested by the body. The mind is not physical but it can be manifested through the physical if it uses the body as a means of exploration. By reaching out to the body, the mind extends itself. In other words the body is an extension of the mind and we can use our body to cultivate the mind and expand mental awareness. The question is how? By  increasing body movement through respectively spatial and physical perception. Conceptually speaking the brain to body mass ratio is of 1:50. The brain (which contains the mind) is limited in size. However, the size of the body is 50 times that of the brain. The brain by itself cannot move under its own command and is limited to move in its own spacial field.