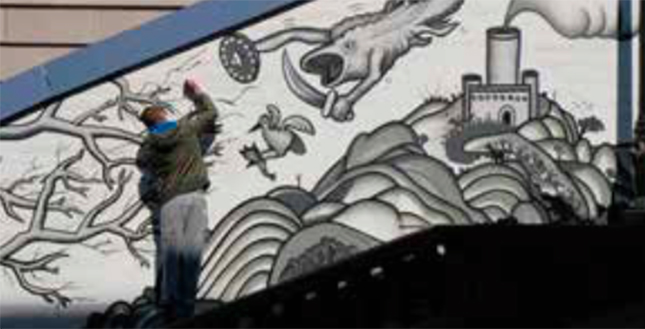 visit.brussels, in collaboration with the Brussels collective Farm Prod has been working on a street art trail to pay homage to the Flemish old master Pieter Bruegel right in the heart of the Belgian capital. You’ll be able to see a first work by the French artist Lazoo in the Marolles neighbourhood, while finishing touches are being put to another on the Rue Baron Horta.

Brussels and Bruegel are inextricably linked. The artist spent most of his life in Brussels, where he is also buried. Brussels was a great source of inspiration for Bruegel, in fact two-thirds of his works were painted here. His influential patrons lived in Mont des Arts, a short walk from his house. Today, it houses a significant part of Bruegel’s work. After the Kunsthistorisches Museum of Vienna, the Royal Museums of Fine Arts of Belgium have the largest collection of Bruegel’s paintings and the Royal Library has no less than 90 engravings.

visit.brussels, in collaboration with the collective Farm Prod, has also paid homage to Pieter Bruegel by developing a street art trail in the heart of the city. The route takes in institutions, passing through places with some notable Bruegel connections (historical links and permanent collections, etc.).

A first glimpse of the work on this trail can already be seen on Rue Haute, close to the Porte de Halle. It is a work by the French artist Lazoo, inspired by the ‘The Wedding Dance’. A second monumental work is currently in progress, close to BOZAR on the Rue Baron Horta. From mid-June onward, at least eleven frescoes, also painted by artists forming part of the  collective together with famous invited artists, will be able to be admired along the trail. A great opportunity to discover Bruegel in a different light. Additional information: Farm Prod

FARM PROD is a collective formed by a number of visual artists centred around various creative projects, based in Brussels since 2003. Though from the same artistic background, each member has, over the years, been developing their own skills. For the past 15 years, these separate spirits have been organising and participating together in socio-cultural events in Belgium and abroad.