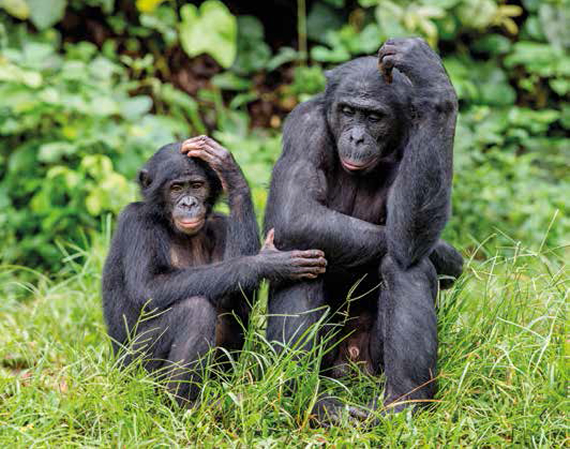 Natalie Morris looks at the tricky question of empathy advice, housewives, bonobos and the inexplicable act of caring.

Lately, I have been thinking a lot about the question of empathy, and its relation to self-help. With the topic in mind, I came across the thoughtful and surprisingly entertaining book The Bonobo and the Atheist, by author and primatologist Frans De Waal. Roughly speaking, it is an essay on the discovery of empathy in primates and how, over the years, it has conflicted with our Christian/Western notions of morality and what it means to be good. For instance, experiments and observations by primate experts that tended to point towards a concern for others were long rejected by most scientists and the public at large, on the basis that for an act to be considered good, it had to come at the expense of the individual carrying it out. In other words, if it benefits us in any way, or even doesn’t affect us at all, it cannot be called empathy.

Moreover, the general opinion on what it means to be good tends to favour morality as a late development in human evolution, and empathy as an inexplicable human particularity that goes against the grain of our animalistic fight for survival. According to De Waal, this scientific view of altruism has a lot to do with Christian dogma, with its still prevailing notions of the uniqueness of humankind as well as self-sacrifice and the importance of fighting our natural instincts. From his primatologist’s perspective, it is time we stop seeing ‘goodness’ in humans as being foremost the result of endless thinking about right and wrong, and start understanding it as something that emerges from the ground up. Empathy is in a female bonobo’s affection towards her young, in the way in which male chimpanzees will lick each other’s wounds after a fight or help an elderly matriarch reach a water source – it’s in the fact that seeing someone yawn will inevitably lead me and the monkeys alike to do the same (a phenomenon that is more prevalent if the other person is ‘a familiar face’). As a species that looks after its young and lives in tight communities, putting ourselves in others’ shoes simply comes naturally to us.

The topic sprang up again when a friend of mine attended a self-help seminar which basically offered advice on how to ‘love yourself’ – namely, by saying “I love you” in the mirror ever so often; carving out the time to take care of oneself; learning to prioritise one’s own needs, instead of always thinking about the needs of others… Et cetera, et cetera. She came out of it in a rather cynical mood – the sentence which best summed up her thoughts on the matter was: “If we thought more about other people, we wouldn’t have as much time to feel bad about ourselves.”