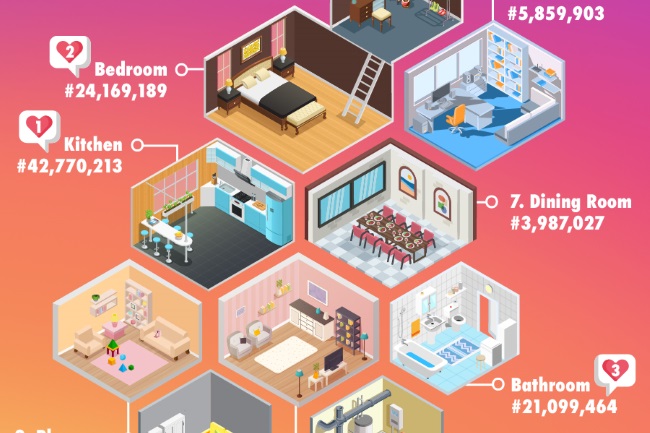 Our family life is currently focused even more on the home environment. Homedit decided to find the most popular rooms on Instagram.

Most popular
The kitchen is known to be the beating heart of any home. Not only is it where we spend most of our time eating, cooking, and socialising, but it can be the epicentre of home design inspiration and where you begin. Predictably, Homedit found that the kitchen is the most popular on Instagram, with a staggering 42,770,213 tagged posts.

Bedroom life
Up next is the bedroom – it seems we can’t get enough of posting photos of our boudoir where we sleep, get dressed and frolic in the sheets, as this room in the house has more than 24 million tagged posts on Instagram.

From brass taps to marbled tiles and rainfall showers, our obsession with bathroom interiors continues to escalate. With 21,099,464 posts on Instagram to date, it’s considered the most likely source of inspiration for the next hottest interior styles and gadgets.

Home working
Since the pandemic, working from home has become the new ‘normal’, a new part of family life for many. Data from Google Trends has highlighted a 60% growth for ‘home office décor’ over the last 90 days. Therefore, it’s evident there’s a growing market of homeowners sharing how they’ve transitioned their office into the home. There were nearly 6 million tagged posts for ‘home office’.

This data was commissioned by www.homedit.com.

* Stacey Solomon is an English singer and television personality. In 2009, she finished in third place on the sixth series of The X Factor. She then and gained a number one single on the UK Singles Chart when her fellow The X Factor finalists released a cover of You Are Not Alone.

Solomon won the tenth series of I’m a Celebrity… Get Me Out of Here! Her debut single, a cover of Driving Home for Christmas, was released on 19 December 2011. Solomon then released her debut album Shy on 18 April 2015. In September 2016, she began appearing as a panellist on Loose Women. In November of the same year, she presented I’m a Celebrity: Extra Camp.
Stacey Solomon on Instagram

More Lifestyle articles on Together