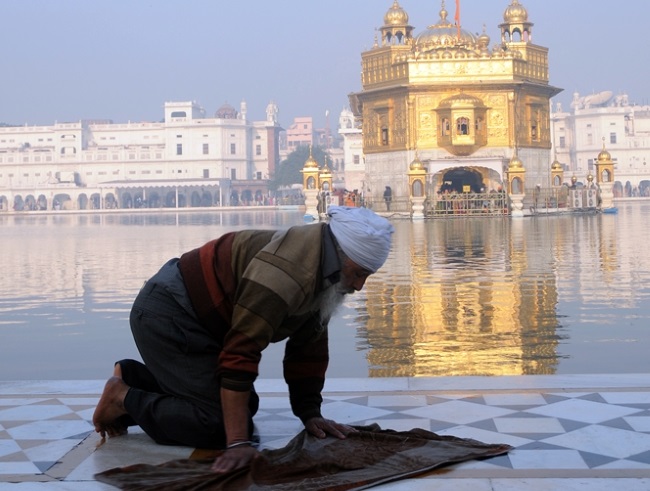 Sarbani Sen seeks the transcendental nature of the self.

Seva is an important component of Indian culture. It has been translated in English as “service”, but Seva means ‘the final stage of human involvement in the world while being in a higher state of consciousness’. The literal meaning would be ‘to be with that’. To be with that which is human, compassionate and loving. In other words, Seva means to connect with the divine, or in a more secular language, with the transcendental nature of the self and to express that nature in thought, word and deed. In Hinduism, to do this you have to let go of the many identities and ideas that you hold close. This is where the concept of letting go or surrender comes in. Surrendering to our “true nature” and becoming the instrument of its peace is the outcome of Seva.

Seva is to purify one’s heart, refine our expectations and attachments, deleting the sensorial or sensual so that you no longer carry any idea of gain or loss. Instead, you feel for everyone as you do for yourself. It is a shift of ideas from self-orientated to self-expressive. Purifying the emotions through Seva improves the qualities of the heart, which are further intensified with yoga.

Keeping a balance between self-oriented and selfless actions
In India, the Yogis (people that devote their lives to the practice of yoga in a selfless philosophy) believe that if we can find a balance in our actions, 90% of life’s problems would be solved. Usually the highest form of yoga is Samadhi (or ‘enlightenment’, like the Buddha for example) but here it is rather about attaining balance between the opposites.

For them, self-oriented actions give birth to strife, expectations, desires, possessiveness, attachments and jealousies. They develop into a mental obsession, a personality characteristic, and go on growing. An attachment grows into obsession, into insecurity. Analyze how an attachment started in your own life. It is not enough to say that you are attached because someone is your father, mother, son or daughter. There is a point when attachment begins and subsequently goes through changes in a positive as well as a negative direction. So, how can we change the direction of our thoughts and actions without creating an imbalance in life? This is where the attitudes of karma yoga come into play.

Surrender
In normal situations, you neither observe nor try to guide your karma (your strings, your ‘set performances’). If you are medical doctor, you go to your medical practice and follow the rules of the profession. There is very little scope for creativity. Similarly, in all areas of life, we follow set performances of the body and mind. A kind of conditioned creativity expresses itself. It is this conditioned creativity that has to become unconditional by adopting the attitudes identified in karma yoga (or selfless actions).

Karma yoga helps develop immunity to the effects or results of karmas. The root idea is to cancel self-promotion from our programme. When you do something, remember that you are not the enjoyer. It may be pleasing to you, but you are working to achieve a level of excellence, perfection and qualitative expression in your life. That has to be the aim of your action. The thought behind every action must be that it should help not one, but many. The action should uplift others, whether they are known to you or are total strangers.