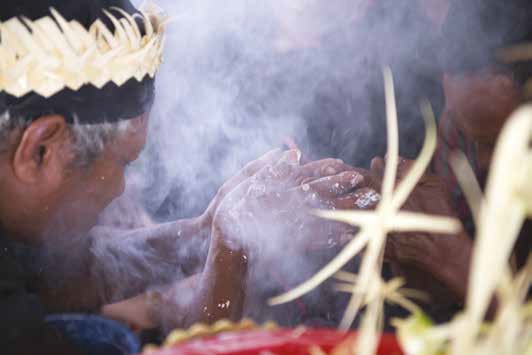 Sarbani Sen takes a broad look at the rituals that govern different cultures.

When we experience violent or important events in our lives, the brain often perceives this as a shock – an unusual event that disrupts the course of things, or alters it: a death, a birth, a move, a separation, an accident, a sale, etc.  But in a more and more globalized, smoothed environment, where culture is mixed, particularisms are lost, and with them the rituals of our ancestors. A piece of humanity is lost. Of course, the consumer society has been careful to keep the so-called ‘commercial’ rituals such as Saint Valentine’s Day and Saint Nicholas and Halloween. But it is important to reclaim certain rituals that mark the course of our stories, both individual and collective. Since it would no longer be possible to adhere today to practices that no longer correspond to our current values, it is interesting to look at the creation and reintroduction of new rituals in life for the few important steps in human life.

These are ceremonies intended to help the subject overcome the crisis represented by a change in his or her physiological or social characteristics. They have an important role in strengthening the social order and the cohesion of the group. By respecting the social rites and the codes specific to the group’s culture, each person in fact manifests his desire to be fully admitted to it, marks his belonging. But today, given the complexity and the mix of the majority of the population, which membership do we talk about? That to the original group? To the group we are currently forming? To both?

The constants of the rite are its repetition, its practice renewed identically, in a perpetually similar context. If we take the example of the funerary rite, it includes: a funeral ritual, a burial ritual (coffin or for Muslims on the right side of the earth towards Mecca, three shovels of earth by those close for Israelites), instructions on the tombstone, and possible bans (cremation, organ donation). Every culture has its own, often linked or grouped with religion. Religion has taken over and instituted these kinds of rites in order to maintain social cohesion in the group.

Western society, more and more liberated from all these dogmas and sectarian beliefs, was at the same time relieved of its panoply of rites. As a teenager, I questioned the importance and the meaning of the rites of my parents (Indian, Hindu, Bengali on one side and Protestant, German on the other, Belgian, atheist on the third). I questioned the need for presence at family meals, weddings, religious holidays, meaning and lack of communion. I felt that my friends had privileges in their social groups that we did not have (just the concept of godfather and godmother we did not really have in Indian culture has long disturbed me and my brother).